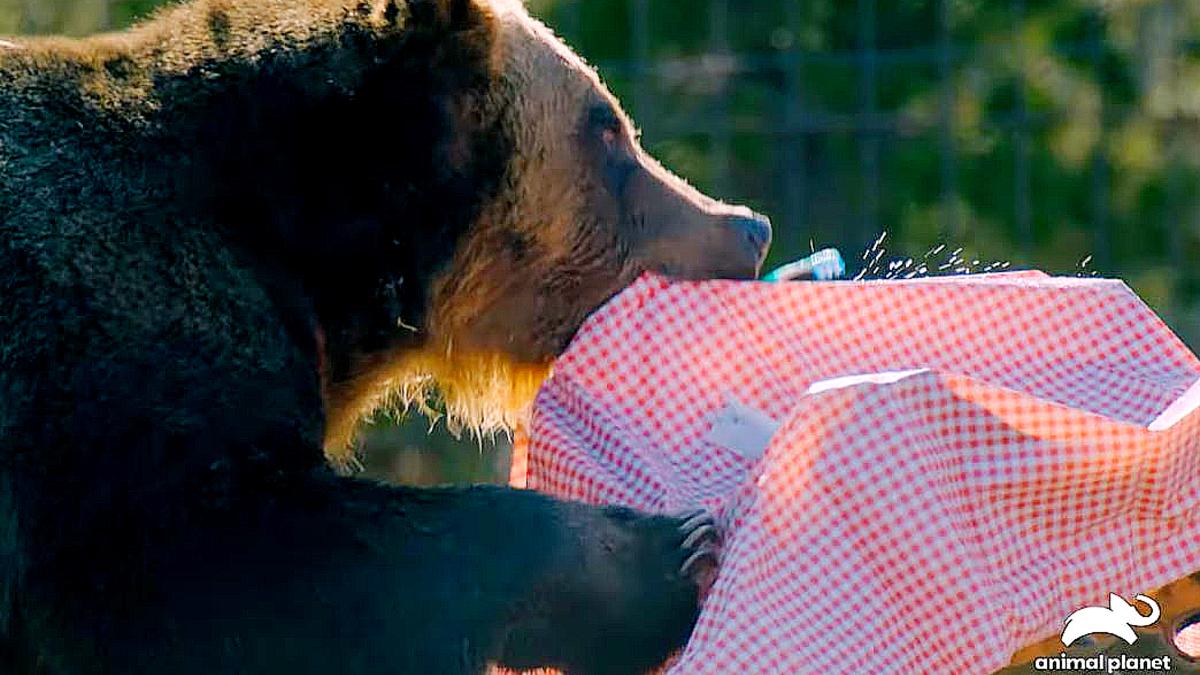 Animal Planet’s latest hit series features two fellows who learn the hard way how to (or not) mess about with Mother Nature. In new series Beast-Kept Secrets we see the two tend to learn on the fly as they enter forests, oceans and mountains in search of elusive apex beasts

And this Friday we will see them fail miserably at bear proofing their spot. In fact, they might as well have an all-you-can-eat buffet neon sign for the bears to saunter on into their campsite for some tasty treats.

The series premiered last week and has introduced viewers to two new stars, Tim Warwood and Adam Gendle, buddies whose cheeky sense of humor is matched by their feckless and at-times reckless immersion into worlds where they could easily become dinner.

What happens on Beast-Kept Secret this week?

The popular BBC Studios series finally has made their U.S. Premiere on Animal Planet

What should we do if a bear is about to attack us?  This week the two are camping, and they think they have done their best to bear-proof the campsite until Liane shows up, clipboard in hand. What transpires in our exclusive clip below reveals the two men might as well have set up a smorgasbord for the local bear population.

Despite the fact Tim Warwood used his own urine to spread a smelly perimeter to ward them off. We learn that does not work with a bear from Liane who is patiently walking these two through their bear friendly spot.

Tim Warwood and Adam Gendle are waking up in chipper moods, with residual egg mess, urine perimeters, bread, honey and a duct-taped cooler strewn about. Gendle greets Liane: “Hey Liane, do you want to check out our bear proof camp?”  Liane notes the obvious, that these two are pretty messy.

Gendle attempted to make scrambled eggs (missed the pan for the most part) while Warwood peed into a bottle and anointed the camp.

She patiently schools the two men. “There is definitely meat residue here. Bears are definitely going to smell that, so you always want to wash up as soon as you’re done cooking…and then even with the water you use to wash… you want to dump that 100 yards away as well.”

Warwood explains his pee strategy. “We know animals use urine to mark out their territory, so that is exactly what I am going to do here. This is like an invisible barrier of smell… this place will be emanating of me.”

Slightly exasperated, Liane replies:  “They definitely know what people are, you don’t really need to add extra scent around.”

The guys show off their massive bread and honey stash and Liane shares the obvious fact that bears dig that stuff. Yogi Bear cartoons must not play in the U.K.

And for duct tape around the cooler? Child’s play for a bear, according to Liane.

The series goes there to the absurd “what-if” place: Can a giant squid sink a ship? Do cats always land on their feet?  Mates Tim Warwood and Adam Gendle explore these questions and more is the name of the game as they go to great lengths to uncover the truth about animals.

A fun fresh take on history filmmaking, Tim and Adam travel around the world to find out if common beliefs and myths about animals are the real deal or hogwash.

The two go on enviable adventures as they meet with experts, conduct unforgettable stunts, get involved and interact with animals – from sharks and piranhas to dogs and cats – to discover the truth about these creatures in the animal kingdom.

In the premiere episode last week, Tim and Adam investigated the common notion that he tensile strength of spider silk was stronger than steel. They participated on a death-defying highline stunt to see if it held water.

Discover the best defense mechanism against a bear attack.