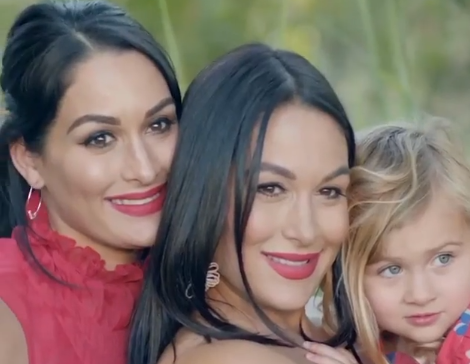 Are you ready for the next exciting season of Total Bellas? Season 6 premieres at 9 PM eastern time on November 12. It’s going to be wild!

A new trailer for the season premiere shows Nikki and Brie where we left them — very pregnant.

“There are stories that I have not told my mom but now the whole world’s going to know,” Nikki says.

The New Season Of Total Bellas Will Explore Motherhood

We know the sisters gave birth a day apart over the summer to healthy baby boys. But now, fans get to join them as they experience the final days of their pregnancies.

Nikki gave birth to Matteo Artemovich on July 31. Her fiancé Artem Chigvintsev is a professional dancer on Dancing With The Stars this year. Nikki and baby Matteo have been cheering him on from home and encouraging fans to vote in adorable Instagram posts.

Brie and her husband, Daniel Bryan, are already the parents of a 3-year-old daughter, Birdie. They welcome their son, Buddy Dessert (pronounced “desert”), on August 1. Afterward, Brie confirmed that she and her husband were content with two children and she had her tubes tied.

Are you excited to see what comes next? Watch the trailer for yourself here:

The Twins Do Everything Together — Even Give Birth

Even though Nikki and Brie gave birth on different days, they confirmed they were together in the hospital.

“We’re lucky because [our hospital rooms] were right next to each other and I was like, ‘My sister and I have been quarantined together and we’re identical twins. Can she come in?’ They said, ‘Okay, in the middle of the night, we’ll bring her, Artem, and Matteo,” Brie said shortly after the births. “Because I had a [cesarean] section and couldn’t get out of bed, they came in the middle of the night, around midnight. It was really emotional to see them and to just see her holding a baby.”

Immediately after the births, Nikki and Brie were both quiet on social media for a while. Fans have no doubt they were just enjoying time with their new sons. Once the twins began posting again, their social media pages exploded with baby photos.

Both families had a fun photoshoot with PEOPLE to celebrate the little ones. If you haven’t seen the photos yet, check out Nikki or Brie‘s Instagram pages.

Be sure to catch Total Bellas when it returns in a month! You won’t want to miss out on all the drama. We can’t wait to see the new babies on the show. Will you be watching? Leave your thoughts in the comments below.

If you liked this story, follow TV Shows Ace on social media. We’re always excited to tell you about all the latest celebrity and entertainment news. Stay tuned for more.