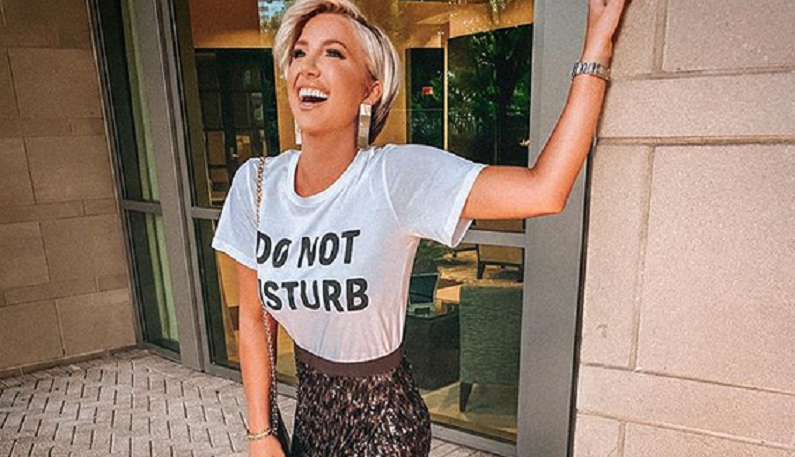 Savannah Chrisley loves her healthy lifestyle. It’s how she got her incredible beach body. The Chrisley Knows Best star made an appearance in a sexy new music video for Chase Martin. In the steamy new video, Savannah changes into a pair of Levi’s jeans.

The reality star is feeling herself these days and it shows. While she is a fan of the South Beach Diet, she’s still going to have cheat days. The 23-year-old showed an ooey-gooey treat on her Instagram Stories. Savannah just can’t resist mom Julie Chrisley’s sweet treats.

Read on to see what Savannah was snacking on.

Savannah Chrisley eats the blues away

Her mom sent her pizza after her split from Nic Kerdiles. Now, Savannah Chrisley is enjoying some monkey bread. On Monday, October 13, she took to Instagram Stories to share the delicious treat. Even Savannah’s brother, Chase Chrisley, shared a picture of the delicious treat on his respective Instagram page.

He previously took to his Instagram Story on Saturday, October 10 to share the mouthwatering dessert. But that’s not all that Julie made. She also made cinnamon rolls, coffee cake, chili, and a bunt cake. Julie likes to make sure that her kids stay happy and full.

Since Savannah’s diet allows carbs and sugar, she will gladly enjoy her mom’s baking. She’ll just work it off at the gym. The television personality was previously seen working out. Savannah has been sharing videos of her workouts on social media.

Last month, Savannah Chrisley focused on getting her mind off Nic. Just a week after she announced her split, she hit the gym in a pair of spandex leggings and a sports bra. Savannah took to Instagram to share her boxing session. She tried to release some stress following the announcement.

In the clip, Savannah tagged her trainer Larry Donald. She was also seen back with her best friend Chadd Bryant. The SASSY by Savannah founder cleared up the rumors that she’s dating her male friend. Savannah made it clear that she’s very much a single woman.

She loves the South Beach Diet

In one video, she ended her workout to talk about her healthy lifestyle kick.

“Alright, y’all. So as you know, I’ve been trying to get back into shape,” Savannah said.

She admits that she’s been trying to get that “quarantine weight off.” Thankfully, she shed it quickly with the South Beach Diet.

“Today’s my first day back at the gym. And after I work out, I’ve been drinking these South Beach Diet protein shakes,” Savannah continued. “They’re phenomenal, they keep me fuller for longer, and they have 20 grams of protein, which is absolutely amazing.”

In the meantime, Savannah is focused on expanding her empire. Her new cosmetics line should be available before Christmas.