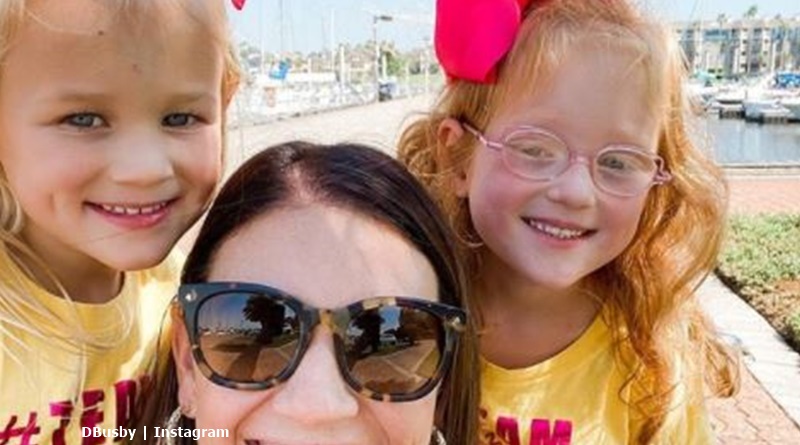 OutDaughtered fans heard from both Adam and Danielle Busby that they took the kids to the Houston Zoo. Their cousins who presently stay with them went along as well. Adam joked about Hazel and some of the animals. And now, Danielle talked about Riley finding her “spirit animal.”

OutDaughtered visit to the Houston Zoo

We reported that all the kids, including cousins, went along to Houston Zoo on the federal holiday this week. Notably, little cousin Evyn looked a bit down. And, several fans wondered if she felt homesick. After all, they stayed with Busbys since Hurricane Laura hit their hometown in Louisiana. But, overall it looked like the kids really enjoyed their day out among all the animals.

Over on his Instagram. Adam joked about Hazel. He posted up a photo of her perched on his shoulders. His caption joked, ” Zoo day with the kiddos! It was a hot one! The orangutans accepted Hazel Basil as one of their own.” Lots of OutDaughtered fans responded to the photo. And, they thought Hazel and her dad looked like they enjoyed their time together. One fan wrote, “Glad you had a fun day at the zoo! Hazel must have enjoyed the ride on dad!😎.”

Zoo day with the kiddos! It was a hot one! The orangutans accepted Hazel Basil as one of their own. #BYLTforTHIS #itsabuzzworld #hazelbasil #outdaughtered #houstonzoo

TLC fans know that Riley’s a bit bossy, and not afraid of anything, it seems. The List reminds readers that Adam once said, “Riley…thinks everything is about her and she will not back down. It is Riley’s world. She’s bossy, she is the toughest, she will pick a fight, and she will win it.” With that in mind, it probably won’t surprise you which animal might fit Riley’s temperament.

Danielle took to her Instagram Stories and shared a few photos of the kids at the Zoo. The place becomes well known for the Dragon event there. And dotted around, you’re bound to spot some dragons in the Zoo. Riley found a huge blue and white one there and posed in front of it. The OutDaughtered mom captioned it with,” Riley found her spirit animal #dragon.”

Actually, it’s rather a pity that Danielle never shared her photo and caption on her main Instagram page. Fans could have left sweet comments there. And, as so many of them adore the bright little girl, surely some entertaining comments would rise. Actually, fans enjoy commenting on the Busby family’s photos. Especially when they see Riley acting bossy.

Next time, maybe Danielle shares something similar on her main Instagram page. Then, her many OutDaughtered likely say plenty of things about Riley’s “animal spirit.” Danielle shared a rather clever photo of her daughter and a really amusing caption. But, as they say in New Zealand, “if the cap fits, wear it.” The dragon certainly seems a suitable spirit animal for Riley, do you agree? Sound off in the comments below.