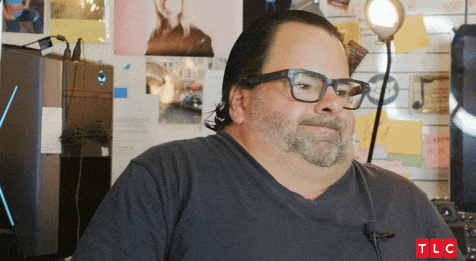 90 Day Fiance star Big Ed Brown is kind of a big deal. He became famous after his debut on Before the 90 Days. The previous season chronicled his relationship with Rosemarie Vega. However, the couple didn’t make it through their season without ending things.

The two couldn’t even get on the same page during the tell-all reunion. Rose made it clear that she was over Ed. Since then, he’s focused on expanding his brand. As TV Shows Ace previously reported, he’s been promoting his Halloween masks. But his method of marketing is giving fans a fright.

It doesn’t look like anyone will want a Big Ed mask anytime soon.

On Wednesday, October 7, Big Ed posted a frightening video on Instagram. It featured a clip from the classic film Gentleman Prefer Blondes starring Marilyn Monroe. But instead of the blonde bombshell, it features Big Ed Brown as the lead star. The hilarious video shows him singing the iconic song, “Diamonds are a Girl’s Best Friend.”

“MARILYN WAS WEARING THE BIG ED MASK BEFORE IT WAS COOL…” the 90 Day Fiance star wrote in the caption. “Get yours at bigedwear.com before [they] sell out!”

MARILYN WAS WEARING THE BIG ED MASK BEFORE IT WAS COOL… Get yours at bigedwear.com before the sell out! . . . . . . #biged #90dayfiance #halloween #costume #faceswap #funny #facemask #refaceapp

Fans found Ed’s post bizarre. Most of them claimed they were going to unfollow the TLC star. “Omg..i am unliking his page rite now..i followed him feeling sorry that his gf dumped him..but what he is now doing is stupidity level at his peak,” one follower wrote.

“Stop please,” another added. “Slow down Bro this is creepy,” a third one added.

Big Ed stars in his own “WAP” video

This comes after Ed shared another creepy clip on Instagram. In that video, Ed’s face was swapped onto Megan Thee Stallion, Cardi B, and Kylie Jenner from the “WAP” music video.

“who wore the big ed mask the best? LmAO omg [sic],” he wrote in the caption before promoting his Halloween masks.

That post alone racked up over 170,000 views. It also got over 1,000 comments from his followers. Most of them expressed being disturbed. “I’m unfollowing big ed,” one user wrote. “It’s not too late to delete this,” another added. “There’s still some time to delete this,” a third user wrote.

The post had a few comments not being negative. Some thought the post was hilarious. It appears that Ed used a face swap app to promote his Halloween masks. It’s a clever marketing ploy since it gets people talking.

According to his official website, he has two Halloween masks for sale. The first is the Big ED Halloween Costume Mask. This Latex mask is for adult 90 Day Fiance fans and costs $25. The second is also an adult mask that’s made from felt. It’s reminiscent of the cutout masks that kids used to wear with their costumes in the ’90s.

Would you wear one of Big Ed’s Halloween masks? What do you think of his Instagram posts? Sound off below in the comments section.

Duggar Fans Ask Hilary Spivey If TLC Filmed Justin & Claire’s Wedding
Jon Bon Jovi Knew Nothing About Show Before His ‘Sex And The City’ Cameo
Ryan Sutter Finds It Difficult To Rest While Recovering
‘When Calls The Heart’ Season 8, Episode 3 Preview ‘From The Ashes’
‘Marrying Millions’: Are Rodney & Desiry Still Together?