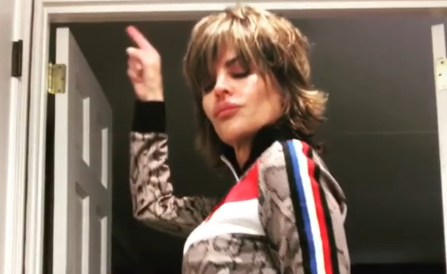 Lisa is going up against two other housewives. Both Kandi Burruss and Porsha Williams from the Real Housewives of Atlanta are nominated. She’s also up against two Kardashians. Kim and Khloe are both nominated. The other two nominees according to E Online, are both from Queer Eye; Antoni Porowski and Jonathan Van Ness. Lisa definitely has some tough competition.

Of Course Users Have Their Doubts About It

Lisa Rinna has gotten a lot of criticism this year. Most of it stems from her refusing to back up her friend Denise Richards when she needed her. Social media users accused her of using her daughters as a decoy when the negative attention hit. She posted modeling pictures of the two of them. Fans also are telling her to cut out the dancing videos. But, Lisa Rinna isn’t going to care what people think.

One user said, “whoever did that; you paid them well.” Another said, “Rigged! I’ve seen nothing but negative feedback all over social media from the people, calling for bravo to fire you..”

A user named Peter said it is awful the awards show is celebrating bullying. Several others chimed in with their thoughts that Lisa is a bully and that the nomination wasn’t right for her. One fan gave a different suggestion stating, “you should win a prize for being the worst friend ever.” Another user wanted to know where Lisa’s spouse was. They posted, “Let’s make sure she doesn’t win people, sorry but not liking anything you did as a so called friend this season. and where’s Harry?”

Hard to believe how different the world was just one year ago. #nyfw missing these special moments with my girls. ✨✨✨

Lisa Rinna Also Has A Lot Of Fans Rooting For Her

Lisa Rinna didn’t just catch hate on Twitter. Some fans stood strong and claimed this is a well-deserved nomination. One of her fans said, “Love it, it shows that while there were a lot of active voices on social media trying to bring you down there was a bigger swell of support behind the scenes…that goes for Teddi too.”

A lot of fans still blame her for Denise leaving the show. The People’s Choice, is based on what fans want to see. So, she clearly still has a following that love the dancing, oversharing, and drama. With the competition so stiff, it will be interesting to see how many people vote for Lisa. Fans can vote for their favorites and see the results on November 15th on E!

Mama June Features On Sober Nation Podcast
Hang In There, Kid! Stassi Schroeder Wants To Give Birth To A Capricorn
How Did Mark Cuevas Of ‘Love Is Blind’ And His Girlfriend Reveal Baby’s Gender?
‘I Love A Mama’s Boy’ Fans React As Shekeb’s Mom Invites Another Girl Over
‘Bachelorette’ Clare Crawley, Dale Moss Planning Thanksgiving Amid Cheating Rumors