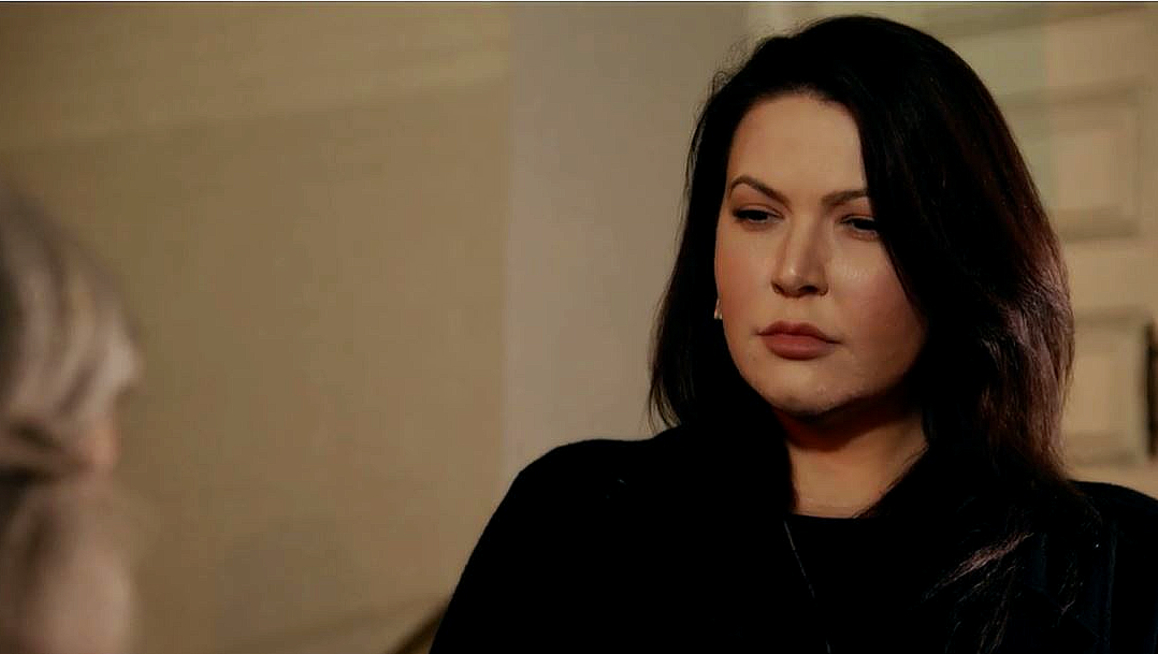 Discovery will premiere The Lost Lincoln on Sunday, and it is a fascinating look at an image of an alleged deceased President Abraham Lincoln that has been hidden for years, now made public to authenticate its veracity and confirm its origin story. This is part of their new Undiscovered series of documentaries.

Leading the investigation is Dr. Whitny Braun, an academic whose alter ego is that of a history sleuth. She uses her own background and education to ferret out truth and to get to the bottom of questionable ephemera—be it an old photo or documents—to establish the item’s value and place in history.

Her work on this Discovery episode is currently embroiled in a huge lawsuit aimed at stopping the broadcast of her two year effort to verify the ambrotype. Her filmed journey to discover the truth takes us from the halls of the National Archives to the scene of his last moments alive in Ford’s Theater and the Petersen House.

The episode is mesmerizing as what is revealed is what clearly appears to be a deceased man who looks exactly like Lincoln.

Professional authenticator Braun consulted experts including renowned historians and Lincoln biographers and scholars and gleaned their input on this image. Using facial recognition, firearms experts, and forensic pathologists, Braun’s result is that after two years of intense scrutiny, she truly believes this ambrotype is likely authentic.

Dr. Whitny Braun (PhD, MPH, MA) is a bioethicist, documentary filmmaker, professor and researcher. She is the Director of the Master’s program in Bioethics at Loma Linda University. She currently works with private collectors as an investigator and authenticator.

As of now, the documentary is set to air on Sunday, October 4 and Whitny Braun, the director of bioethics at Loma Linda university, spoke to TV Shows Ace a week ago about her work verifying this newly discovered, secret photograph which could be the 131st and final image of President Lincoln, taken after his infamous assassination.

How did you came into what you do professionally? Your interaction with your father leads me to believe that it was he who might have helped you decide that you wanted to do this for a living?

Whitny Braun: Yes, very much so.

Tell me how this came to be?

Whitny Braun: Yes, so it’s a funny backstory, I was friends with Archie Gips, one of the owners of [production company] Unrealistic Ideas and really just casual friends. I am a professional bioethicist and college professor, and then I do the authentication as my side hustle.

I have so many student loans to pay off, and he and I were just chatting and I said, ‘Hey, wouldn’t it be cool to have a show that was like Antiques Road-show-meets-Forensic-Files?’

And he agreed and that it was a cool idea. And we decided we were going to make a show called The Authenticators, which we made a presentation for it. And then when we were hunting for items to feature for that.

A guy called me and said he had this picture of Lincoln. And then the idea for The Authenticators just sort of fell by the wayside. We went, no, we’re all in on this picture. Right.

So that’s how it evolved… wouldn’t it be kind of cool to explore thrift store finds and things [that] people find, and use modern science and investigation techniques to vet and verify lost pieces of history. That was cool in itself.

Then when a picture alleged to be Lincoln shows up, it was just like, okay, this is your once in a lifetime. That was the evolution of this.

You very much might be part of a deposition because this, this is a legal matter. For people reading this, you got wind of this from someone who is claiming that his ex wife stole this item and put it up for auction, correct?

What is the status of that?

Whitny Braun: So that case is pending. It’s playing out in Illinois and, we don’t know yet. Uh, there’s a hearing coming up October 14th, but, that case is, is ongoing. The documentary is a very separate animal because it has to be the ownership of the image is a separate issue than the authenticity of the image, because the courts are not concerned over whether it’s real or not, the courts are treating it like it’s a car, who owns it.

My hope is that, however, the court case is resolved. It ends up in a museum. It’s really what I hope more than anything, but because I do fervently believe it’s authentic.

What was your first reaction when you saw the photo?

Whitny Braun: Utter disbelief. What happened was the first time I saw it, I saw the photocopy of it. And if you see a photocopy of an ambertype, but he put a glass photograph on a Xerox machine, it’s just dark and kind of murky. The first time I thought it, I went, ‘Oh, well, I can’t make out any details here. I don’t know what this is.’

And then when I saw the actual image itself, it’s only two by three inches…but blown up and illuminated, when you shine light through one of these glass plates, you see every detail. Not to make it sound cliche, but it’s my jaw dropped because my initial reaction was, ‘Oh my God. It is, that is exactly what he said…it’s a photo of dead Lincoln.’

I spent probably two years really at odds with myself because my gut said it was, but I just felt like, the angel and the demon on each shoulder was like, okay, but this could be false. Every single investigation and every type of test was basically attacking it and trying to disprove the image. And we would take one step forward and one step back, and ultimately the end of the journey was we couldn’t prove that it wasn’t, [we] could not find a single bit of evidence that suggested it wasn’t what it alleged to be.

One of the things that I took away from watching this was how little human nature changes especially with regards to politics. John Wilkes Booth was a domestic terrorist. He hated Black people, and Lincoln…. he took it upon himself, like a militia man to, to dispatch Lincoln. Tying this in, Dr. Omalu was a very profound expert in his reaction…

And when he went through and confirmed everything, it was only then that we told him, well, we think this is Abraham Lincoln.

We didn’t catch this on film because this was not part of what was filmed in our initial meeting with him but it was a very emotional experience for him because he had always revered Lincoln. Coming here with the American dream and [he] sort of held Lincoln responsible in large part for his achievement of the American dream.

And making it possible for African Americans to have the lives that they have today and the legal standing that they had today rather. It was a very kind of emotional touching moment. We didn’t actually get on camera the very first time. He and I talked, of it hitting him, having that moment of realization.

I think that is something that’s important to me with this documentary that, some people will look at the picture and go, ‘Oh, it’s macabre.’ I don’t think it’s macabre, I think it’s haunting. A testament to the fact that our great president was very human, and death comes for all of us and death happened to come for him in the service of our country.

I think this is a very poignant reminder of what service to your country looks like . And, he did die at the hands of someone who felt that his social progressivism was a danger to traditional way of life.

Another thing that I took away from watching your documentary was the chemistry on screen and the rapport that you and your father have, and you both are really terrific. Are we going to see you two together in a reality series?

Whitny Braun: Oh gosh, I hope so. I mean, honestly, my biggest hope is that this will prompt people to go into their attics or to flea markets, or, if they’re cleaning out a foreclosed house and find old photos, don’t throw them away. Do not!

I grew up with my dad, my dad’s a gunsmith. We would be called upon to check out old guns in [people’s] their attic. And some of them, we were able to link to crimes, by searching the serial numbers.

There’s so much historical detective work that can be done if people don’t just throw away history, but it is also kind of human nature to just be like, ‘Oh, something’s old. I don’t need it anymore.’ Or…’I don’t know who that person is in that picture.’ And it goes in a dumpster.

This image of Lincoln was found in a hoarder’s house, found in the possession of Margaret Hanks and she died in a house with no running water that was basically condemned as a hoarder dwelling.  I would love nothing more honestly, than to be able to keep doing this and particularly to be able to do it with my dad and add more to the annals of history through finds in people’s attics.

Clarify something for me real quick. So it was my impression that Margaret sold that image to Larry Davis, is that not correct?

Whitny Braun: It is true. So she sold it to Larry Davis in 1982. She died in 1986, but she sold it to Larry in 1982, as she was trying to clear out that house because she knew the end was near, but when she did pass away, I mean, the house was just it’s full of old newspapers, so it was a hoarder’s dwelling and it was torn down. I think there’s a Kmart on its location now. but it’s just a representative of the fact that I think history can be amazing. Finds, can be found in the most unlikely places.

THE LOST LINCOLN premieres Sunday, October 4 at 9pm ET/PT on Discovery as part of UNDISCOVERED, the new Discovery documentary strand that explores some of our greatest mysteries, potentially rewriting the history books along the way.

In addition to watching THE LOST LINCOLN on Discovery, viewers can check out the special by downloading the Discovery GO app. Join the conversation on social media by using the hashtag #LostLincoln and follow Discovery on Facebook, Instagram, and Twitter for the latest update

Chris Harrison On If Clare Crawley Was Forced Out Of ‘The Bachelorette’
’90 Day Fiance’: Yolanda Leak Is Now Officially Engaged
‘LPBW’: Lilah Roloff Takes it Away For Halloween Cuteness
Eric Nichols Has A Pool Party With Himself
Who Won ‘Big Brother All-Stars’ And America’s Favorite Houseguest?