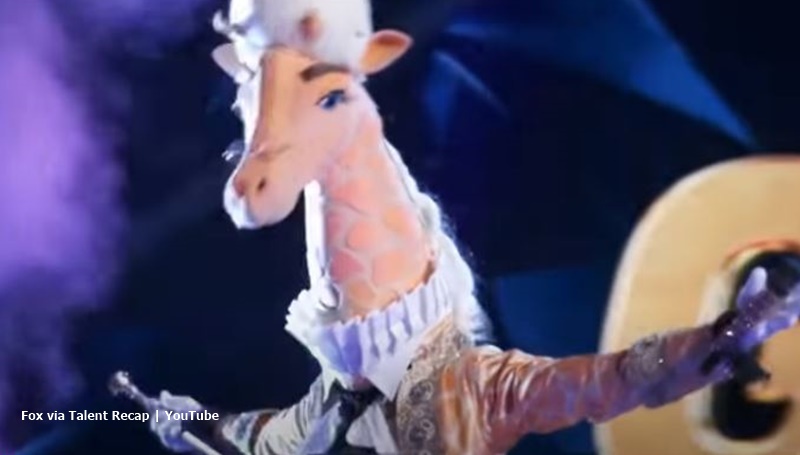 The Masked Singer on Fox brings some stunning masks and costumes in season 4. So far, the Snow Owls took it for cuteness. And, the Sun blew everyone away for brightness. But, the Giraffe seems the most classy of them all. And, fans naturally guess who hides underneath that African-themed animal.

During the premiere, fans watched five very well-performed acts. Many of them think they already know who features inside that soft and cuddly look of the Snow Owls. Many people suspect a country singing duo. And, when it comes to the Sun, it seems lots of people agree it might be LeAnne Rimes. But, plenty of people now wonder about that rather stately-looking giraffe.

One of The masked Singer clues that came about the Giraffe comes from him saying, “America, trying to figure out my identity is going to be a real pain in the neck.” And, the stately Giraffe “shares something in common with a powerful giant.” Goodhousekeeping suggested RuPaul, “best known for being an iconic drag queen and donning elaborate costumes.” And, the outlet also suggests it may perhaps be “Lin-Manuel Miranda” due to the similarity of the costume in Hamilton.

What do fans think about Giraffe?

Over on Twitter, the big meetup of fans of the Fox show goes down. Plenty of people throw out their ideas about who might lurk under the spectacular costumes. When it comes to the Giraffe, multiple ideas float around. One fan suggested “Chet Hanks.” Then, another one went for Hugh Jackman. They commented, “I have almost no proof but I’m so sure about the giraffe being Hugh Jackman.” Actually, one or two other fans also came to the same conclusion.

What other names get bandied about for The Masked Singer Giraffe mask? Well, some fans come with some rather compelling arguments. One said, “The Giraffe is definitely not @Lin_Manuel. maybe @ARamosofficial or could be @leslieodomjr. just my thought.” Then, another fan suggested, “I thought the giraffe was one of the members of the Black Eyed Peas (no evidence to back this up) but the clues he gave about anonymity and not having to sing tonight make me think otherwise.”

#TheMaskedSinger the giraffe is Macklemore

Other ideas that come out for The Masked Singer’s Giraffe

Other names the cropped up included ” Eminem.” “Vanilla Ice,” “Herschel Walker,” and “Anthony Ramos.” But, as the show promised at least one Olympian, one fan thought of the Giraffe.  With such a long neck it might indicate someone who reached up high and took gold. That’s not a bad possibility. At least one fan even suggested “Will Smith,” as they thought about Men in Black.

Who do you think hides under the Giraffe costume in The Masked Singer? Sound off your thoughts in the comments below.