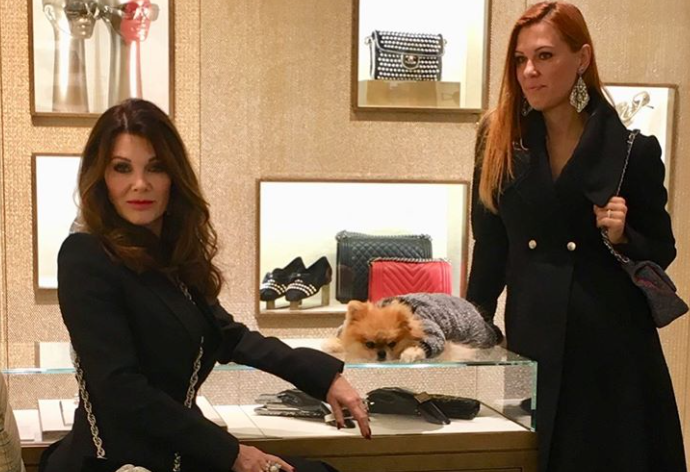 Lisa Vanderpump doesn’t keep her opinion to herself. Now that she has a podcast, she can talk about whatever she wants. After learning about Teddi Mellencamp not being asked to return to Real Housewives of Beverly Hills, she had some thoughts about the situation.

Vanderpump isn’t sure why Teddi is leaving. She said Teddi bored people. Vanderpump stated, “I certainly didn’t have a good experience with her, so boring would be one of the nicer things that I could say.”

Lisa Vanderpump touched on the controversy surrounding Mellencamp’s business. She said, “I think there was something of contention about her business. Something about 500 calories a day.” Vanderpump said she didn’t think anyone could survive eating that little.

She joked she ate that many between the early AM hours of 2:30 and 4:30. Teddi faced criticism when an influencer shared messages from the program’s clients. They stated the program restricted them to very few calories and an hour of cardio every day. On average a person needs around 1600 calories according to the DHHS. According to People, Teddi defended her program. She said it was, “very transparent from the beginning.”

Lisa’s fans are loving getting to hear her more often on the podcast. One posted to her Instagram, “With Teddy leaving RHOBH, will you please consider returning back to the show? C’mon darling.” Another fan had the opposite opinion saying, “Lisa.. you are way too classy for the show! Don’t return… it’s beneath you and your family.”

I have finally started preparing for my own Podcast show! I am excited to connect with you guys more through this series, and I would love to hear what topics and questions you have for me! Business, entrepreneurship, design, restaurants, wine & cocktails, food, cooking, activism, philanthropy, dogs, ponies, marriage, relationships, sex.. or lack thereof lol! I would love to focus on all aspects of my life and have some great discussions with you! Submit your questions if you have them to LVP@kastmedia.com so that your ideas can be part of my first couple of episodes!

Why Is Mellencamp Not Returning?

Lisa Vanderpump didn’t focus too much of her attention on Teddi’s situation. Teddi announced on Instagram her contract wasn’t renewed. She said, “Of course I could give you the standard response of, ‘Oh we both came to the decision that it would be best.’ Nah, I’m not going to do that — that’s not who I am. Of course, when I got the news I was sad.”

She went on to say it felt like a breakup because you develop such an attachment to the cast. Teddi said she is looking forward to focusing on her family. She said, “I really feel like I have some exciting things ahead. And you know what? I’m pretty busy with this lil’ nuggs.” Teddi turned the camera to show off six-month-old daughter, Dove. Teddi and her husband Edwin Arroyave have two other children, a six-year-old son, Cruz, and an almost seven-year-old daughter, Slate.

Vanderpump ended the conversation about Teddi with one more diss. She said speaking of the diet, “I guess whatever works for you — but apparently, it didn’t for everybody. Anyway, wish Teddi Mellencamp all the best… said no one ever. Okay, moving on.” Vanderpump’s podcast airs on Tuesdays.

Ivy Seewald Tastes Produce From Jana Duggar’s Garden
What Lauren Caldwell’s Engagement Means For Duggars
How Does Kim Kardashian Make Her Money On Instagram?
‘DWTS’: Who Does Jesse Metcalfe Think Will Win It All?
Zach Roloff Gets Candid About Fatherhood, ‘LPBW’ Fans Love It