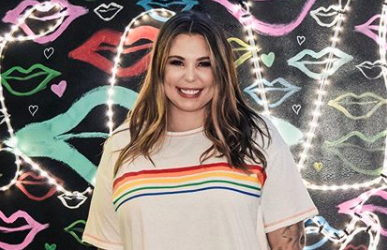 Teen Mom 2’s Kailyn Lowry was in a joking mood during a recent episode of her podcast. She made herself the center of the laughs as she blamed her lack of a filter for making her past relationships fail.

The Teen Mom 2 star even alluded and joked about her self-inflicted jokes on her Instagram caption on Monday, September 21. She captioned it, “Just troubleshooting my relationship issues on the newest episode of @coffeeconvospodcast

US Weekly reported that during the podcast Kailyn Lowry said, “Maybe that’s why my relationships haven’t worked out, because I’m just, like, immediately, like, ‘Here’s all my baggage.” She continued saying she never takes the time to let them get to know and love the good parts of her first. She just likes to be open from the beginning and it can often scare partners away or overwhelm them.

Kailyn Lowry has been very open about the ups and downs of her relationships through her social media accounts.

Most recently she has been sharing her issues with co-parent Chris Lopez, with whom she shares sons Lux, 3, and Creed, 1 month.

Chris Lopez cut their three-year-old’s hair without her permission. Kailyn Lowry was not happy about Lux’s haircut. According to US Weekly, the pair began indirectly calling each other out on social media. Kailyn accused Chris of only cutting Lux’s hair to be manipulative and controlling towards her. She even called him a narcissist, while he fired back saying she was lucky he didn’t shave Lux’s whole head.

Even in spite of the new haircut fans will not stop bashing their son for having long non-traditional hair.

This is what football with 4 kids looks like 😂 & PSA I KNOW THE MASK GOES OVER MY NOSE. we are outside and I’m more than 6 feet from everyone. @isaacelliottr @thelincmarshall @theluxrussell

Despite all of the relationship struggles Kailyn Lowry has faced she still wants more children.

Ever since giving birth to her latest son Kailyn has been fairly open on her Instagram. She has shared a lot on the struggles of being a single mother of four and has received plenty of backlash.

According to US Weekly, Kailyn made a joke saying she probably needs some sort of professional help. This is because there simply is no other explanation for why she would be thinking about having another baby so soon after giving birth.

Kailyn really does seem to have a knack for making jokes about herself!

What do you think of Kailyn Lowry being so open with her relationships? Let us know what you think in the comments below. Be sure to watch new episodes of Teen Mom 2 on MTV Tuesdays at 8 p.m. ET.