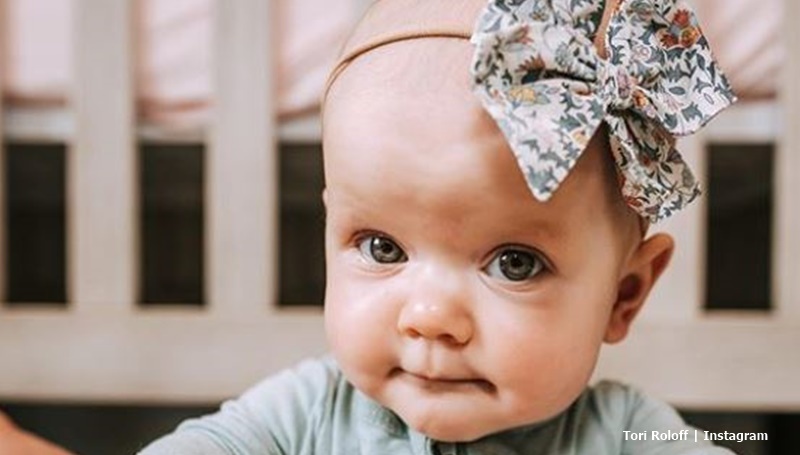 LPBW star Tori Roloff reminded her fans that baby Lilah nears one-year-old already. She gave fans an update on Jackson’s little sister and listed her milestones. Hopefully, plenty more updates come along in the future. Baby Lilah features in the upcoming season of the show. And, she’s bound to get many devoted fans.

Little People, Big World stars, Zach and Tori already share a lot of photos of baby Lilah. Actually, it seems like just a few weeks ago, they shared similar updates on Jackson. Neither Tori nor her fans can get over how fast time flies by. On Instagram, Tori shared, “We’re officially 2 months away from a year!! 🤯🤯🤯 I am all about dressing this girl in all things fall! 🧡🍁🍂🌻.”

The TLC star shared more than one photo of Lilah, and in two of them, she sucked on her 10-Months card. She looked adorable with her little head bow, a thick sweater, and tiny little boots. Of course, plenty of LPBW fans reacted as Lilah’s very cute. One said, “I’m absolutely in love with this cutie biting the sign.😅💗💗💗 the most adorable photo I saw today 🥺🥰💗💗💗.”

In her caption, Tori mentioned more about her daughter. The newest member of Little People, Big World “loves clapping!👏🏼” But hilariously, Tori added, “She CAN sit up but won’t. 🙄.” Then, she talked about Lilah’s favorite food. She loves eggs! And, she already went on a trip. Tori mentioned that they took Lilah with them to “Colorado.”

Calling her daughter “Girlsie,” Tori told LPBW fans that she loves the camera. Well, fans know that Jackson took to the camera as well. But, Lilah’s a bit of a handful when it comes to taking photos as she “will no longer sit still for photoshoots.” Apparently, she adores her mom, and never stops talking either. Tori sounds very happy, and fans who watched the teasers for the new season know she stressed badly at one stage.

We’re officially 2 months away from a year!! 🤯🤯🤯 I am all about dressing this girl in all things fall! 🧡🍁🍂🌻 Lilah girl loves clapping!👏🏼 She CAN sit up but won’t. 🙄 She loves eggs! 🥚 Lilah went to Colorado for the first time. 🏔 Girlsie will no longer sit still for photoshoots but she still loves the camera. 📷 She is obsessed with mama.👩‍👧 Girl will also talk your ear off!🗣 We love you Lilah girl!! Now just stope stressing mom out so much and we’ll be solid!😋 #babylilahray #toriroloffphotography #zandtpartyoffour

Lilah in the new season of Little People, Big World

We reported that in a new teaser for the TLC show, Amy comforted Tori. Zach’s wife broke down and cried as she worried about Lilah’s health. The footage revealed they went off to the ER as she thought Lilah acted as if she felt some pain. Tori suspected her child suffered from hydrocephalus. Fans also see more of Jackson in the upcoming season. Of course, they can’t get enough of the sturdy little boy.

More comes that shows Amy and Matt still disagree and bicker. People reported that they clash once more over the farm and Amy tells Matt he’s too “pushy.”

The news season of LPBW premieres on TLC September 29.