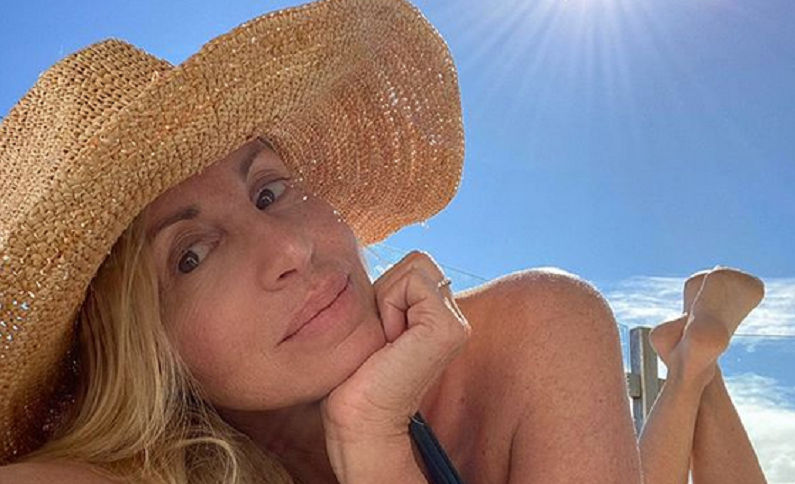 Camille Grammer isn’t hiding her feelings on The Real Housewives of Beverly Hills. Although she left after Season 9, she still closely watches the show. Earlier this week, she got into a Twitter feud with Kyle Richards. Then she dropped hints that Erika Jayne is rude to production and crew.

Now, Camille has more tea to spill. She claims that both Kyle and Erika pull the strings when it comes to storylines. As fans know, the storylines have gotten a bit repetitive. It feels as if the ladies attack one co-star per season instead of showing their real lives.

It appears there is some truth to those rumors.

The RHOBH alum isn’t done slamming Kyle Richards. Camille Grammer and Kyle got into with Teddi’s controversial fitness regimen. Now, Camille revealed Kyle has a hand in the show’s storylines. A fan accused Camille of meeting with the RHOBH cast.

“Didn’t you film with [Kyle Richards] and Denise after this timestamp? Including Kyle’s charity event?” the fan tweeted.

“Like I said they kept calling, texting to get me to film with Kyle not the other way around,” Camille responded.

Like I said they kept calling, texting to get me to film with Kyle not the other way around.

In a follow-up tweet, Camille hinted that Kyle controlled storylines in the past few seasons.

“Pretty sure saying Kyle has manipulated every season — isn’t an unpopular opinion to me hahahahahaha,” she retweeted a RHOBH fan. In the message, Camille added a series of clapping hands emojis.

This is an interesting development. Fans previously noticed that one of the Bravo producers are good friends with Kyle, Erika Jayne, Lisa Rinna, and Teddi Mellencamp. In addition, Kyle had issues with Brandi in the past. On Season 10, she sided with Brandi when it came to her allegations about Denise.

Erika Jayne has pull in storylines as well

Kyle Richards isn’t the only one who’s stirring the pot. During part two of the Behind the Velvet Rope Podcast with David Yontef, Kathryn Edwards claimed that Lisa Vanderpump had no intentions to leave the show. But she wanted to after producers wouldn’t agree to manipulate storylines.

Camille Grammer joined in on the conversation from Twitter and claimed this is true. She also hinted that Erika Jayne is also guilty of manipulating storylines so viewers can only see one side of their lives.

💎 #RHOBH: The drama continues on @behindvelevetrope Podcast during their Part II sit down with Kathryn Edwards. This is the episode that caused a Twitter war between LVP and Kathryn based on Kathryn’s claims that LVP didn’t want to leave the show but quit after producers refused to allow her to manipulate storylines. Camille Meyer has now joined in the Twitter feud claiming this is true and that Erika Jayne is also guilty of manipulating storylines. The episode that has cause this 3 way Twitter feud!! Thank you @behindvelvetrope Podcast! Link in my bio!

Camille hates what RHOBH has become

In another Twitter post, Camille Grammer calims that The Real Housewives of Beverly Hills “has taken a turn for the worse.” During her rant, she revealed that she has no plans to return to the show next season.

“Please come back next season to give me a reason to watch again,” one fan begged.

Another used called out Camille’s hypocrisy. The fan wnated to know why she continues to bring up the show if she doesn’t want to be a part of it. Camille says she gave “life” to the show but noticed how “worse” it has gotten.

“Why not? I helped give this show life and they are destorying it,” she responded. “I would like to see it succeed but it has taken a turn for the worse.”

Before appearing on Season 10, Camille accused her co-stars of using her for storylines. This backs up her recent claims that Erika and Kyle pull the strings. What are your thoughts? Do you agree with Camille’s claims? Sound off below in the comment section.