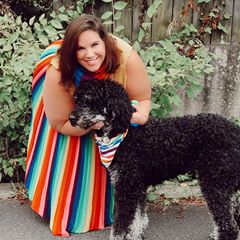 TLC’s My Fat Fabulous Life, Whitney Way Thore has always been outspoken and likes to push the envelope in her life but one picture of her Instagram is grabbing a lot of attention!

A lot of drama

The fun-loving Whitney never let her weight get in her way of life, but fans have also watched Whitney Way Thore go through so rough spots in her life. Her troubles seemed to be in her past as fans watched her then-boyfriend, Chase Severino, propose to Whitney on her TLC show! Whitney said yes to Chase’s proposal and the excitement was felt through Whitneys large community!

Whitney posted on her Instagram page that the couple broke up. Whitney writes, “Chase reconnected with a woman with whom he has had a long history,” the activist’s original post read. “Chase recently told me this information and the fact that it had resulted in a pregnancy. Chase will be a father in October.” The dad-to-be took to his own page to announce that he is “very excited” about having a baby on the way and wants to keep the identity of the mother of his child private.

Chase, sporting a new hair cut, announced he welcomed his new baby, three months after he and Whitney decided to split ways according to MSN Entertainment.

looking at Whitney’s Instagram post you can see that she is back out there and enjoying her life! Whitney has been posting pictures of her poodle, hench, Her friend, Buddy, and a lot of selfies showing off new outs fit and just enjoying life, but one post stuck out the most!

The most recent photo of Whitney is another pool picture. Whitney writes “What do y’all prefer? One-piece, two-piece, or no-piece?”  Wait, is that a naked Whitney Way Thore in the pool? Whitney’s confidence shines as she poses half covered in the photo!

What do y’all prefer? One-piece, two-piece, or no-piece? 😂

Whitney has an incredible community that supports her! This photo receives a lot of their reactions! One poster writes ”You got all three working!! So beautiful, and can’t wait to see you and the gang back on TV!” Another writes “I prefer a two-piece for myself. I prefer whatever you’re comfortable in for you!’ I think we can all guess that Whitney prefers the ‘no piece’!  As I stated before this girl has some super awesome fans that love her and make it clear in every post! One person writes” I love you photos.. you are so strong… I admire you with all of my heart..’

Whitney is amazing and can handle anything! Her wonderful show My Big Fat Fabulous Life returns Tuesday, November 10 at 9/8c on TLC.