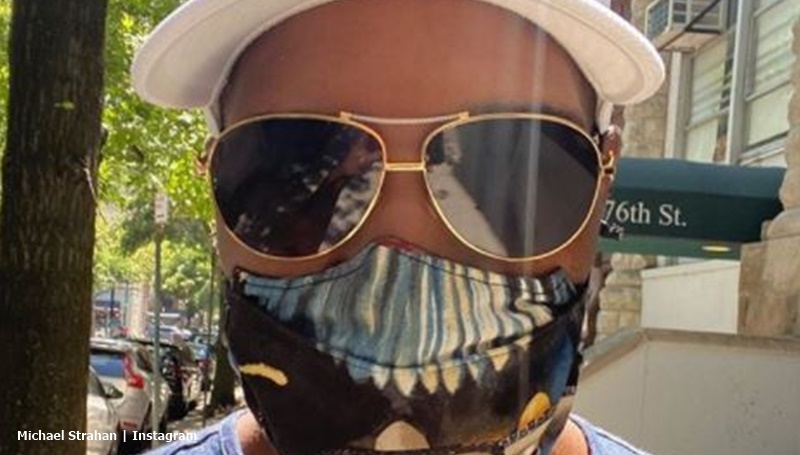 GMA followers heard the sad news that Michael Strahan’s dad, Gene passed away about a week ago. On the Good Morning America show, his co-host Amy Robach talked about his burial and paid him a tribute. Now, Michael shared some memories of his dad with his Instagram fans.

When Amy shared her tribute to Gene, she revealed his backstory. People reported that she mentioned how Gene, 83, had eight siblings, and he got a high school diploma. After school, he joined the army and became a major in the “82nd Airborne Divison. Michael’s dad married his wife Louise and they shared their life for 63 years. At the time, Michael didn’t share a tribute but he took to Instagram on Thursday and shared a post about him.

The photo that Michael shared with his GMA fans showed him standing with his dad. Celebs like Charissa Thompson from Fox responded. She shared a praying hands icon. Then, Rebecca Jarvis from ABC noted, “Oh Michael, so sorry. Sending you and your family so much ❤️.” Shawn Merriman, also an ex-footballer like Michael commented, “I’m sorry brother.” Meanwhile. Super Bowl champ, DeMarcus Ware wrote, “You have my prayers brotha 🙏🏾.”

Michael captioned his post with, “It’s been a little over a week since I lost my hero and it’s still hard to believe my dad is no longer with us physically.” However, Michael takes some comfort as “his spirit lives on thru me and the rest of the family” Michael noted that he just hoped to make his dad “proud.” And he did that, so, Michael finds “peace” in that. But, he added, he “also pushes me to continue because I know he’s watching from above.”

Touchingly, the GMA host noted that “Nobody is perfect but he was perfect for me.” He also gave thanks for his dad and credited him with helping him live his own life well. Michael feels very “honored” that Gene fathered him. Then, he reminded his fans about the importance of family. He urged them to “take time to hug your parents, spouse and kids. Let them know how you feel and don’t take it for granted that they automatically know that you love them.”

It’s been a little over a week since I lost my hero and it’s still hard to believe my dad is no longer with us physically but I know his spirit lives on thru me and the rest of the family. The biggest goal in everything I’ve ever done was to make him proud. Knowing that I did that gives me peace but also pushes me to continue because I know he’s watching from above. Nobody is perfect but he was perfect for me and I’m so grateful that he was my dad. Without him I’m not sure where I’d be but I know I wouldn’t have anything close to the life I have now. Love you Dad and I’m honored to be your son!! Take time to hug your parents, spouse and kids. Let them know how you feel and don’t take it for granted that they automatically know that you love them.

Friends and fans comfort Michael over the loss of his dad

Apart from many work colleagues and friends, other GMA fans also reached out to Michael. One of them commented, “sorry for your loss 🙏🏻I lost my mom in June I’m still in shock 😞stay strong.” Another person who empathized noted, “As a fan of yours, just wanted to express my sympathies. I too have lost my dad, my hero. I feel your pain in your beautiful words. Peace be with you.”

Remember to check back with us often for more news about your favorite reality TV stars.

‘The Young and the Restless’ Spoilers, August 2-6: Phyllis Gets Everything She Needs
‘RHOBH’ Queen Bee Kyle Richards Runs From Hive Of Bees (VIDEO)
Did Duggar Cousin Amy King Take ANOTHER Dig At Josh Recently?
‘The Bold and the Beautiful’ Spoilers, August 2-6: A Wedding For Steffy and Finn
Artem Chigvintsev And Nikki Bella Celebrate Their Son’s First Birthday