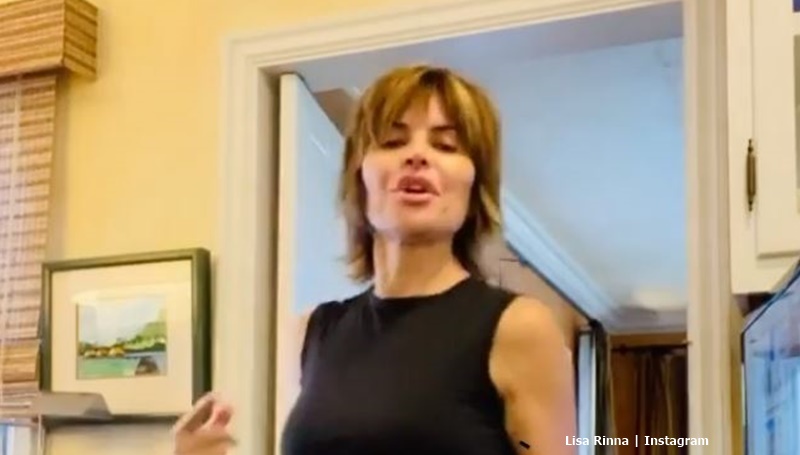 RHOBH fans saw that Lisa Rinna revisited her “WAP” dance recently. The Real Housewives of Beverly Hills star gave fans a lot to look at in her Instagram video. Very raunchy, fans complained that she embarrasses herself and needs help. But, it seems she cares nothing for critics. She got spotted going braless in a tank top this weekend.

The Real Housewives Beverly Hills star certainly exhibits little concern about flaunting her body. Often, she shares very risque videos and photos on her social media. We reported that she got slammed by fans for her “WAP” dancing recently. Lisa wore just a “black leotard” and spent much time spreading her legs and rolling around.

Not only did the Bravo star embarrass herself, but she also made fans feel embarrassed. The Blast recalled Lisa Rinna’s, “embarrassing” moment “just three days ago.” But, they noted that it seems she’s unmoved by all those critics. They reported that over the Labor Day Weekend, she flaunted herself without a bra in Malibu.

The Daily Mail UK originally published the photos and the story about Lisa in her skimpy outfit. She and her husband Harry Hamlin “strolled around after enjoying a meal at an Italian eatery in Malibu.” The photos revealed her wearing hot pink shoes, “form-fitting black leggings,” and a tiny tank top, sans bra. Her perky bosom was clearly visible under that tiny tank top.

While the RHOBH star didn’t wear a bra, she wore a mask. But, maybe people didn’t look much above her neckline. People certainly can’t body-shame Lisa Rinna, as she looks fantastic. But, many Bravo fans just wish she’d dress and behave with a bit more decorum. After all, she’s no spring chicken anymore.

Many fans of the show think that Lisa should provide a better example to her daughters. But quite often, Delilah and Amelia stick up for her on social media. They seem perfectly comfortable with their mom’s rather out-there ways. But, even Amelia said, “God,” and “Hh MY,” on the “WAP” dancing post.

When the Aussies go in. @theinspiredunemployed 💦 #WAP

Meanwhile, some RHOBH fans said that Lisa “needs lots of therapy.” Others just felt sorry for the kids that their mom flaunts herself all over social media. One said, “Omg 😮 how old are you! Act the age that you are! Kids must be embarrassed.” Well, in answer to all of those comments, like water off a duck’s back, Lisa took to the Malibu streets looking hot in her braless outfit.

What do you think about Lisa Rinna in Malibu? Should she tone it down or celebrate her beautiful body? Sound off in the comments below.