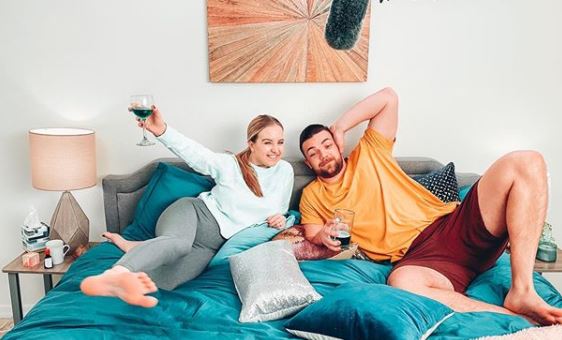 90 Day Fiance fans have been waiting to find out what Andrei Castravet has been hiding about his decision to leave Moldova. Finally, fans have the answer!

Special thanks to ScreenRant.com for the information on the upcoming episode of 90 Day Fiance.  We finally hear from Andrei, after learning that he had to flee his country due to the corrupt police force.

In the last episode, taking place on August 30th, we saw the outcome after a wonderful winemaking experience with Andrei, Libby, and her family. That family bliss was short-lived after Libby’s family, Chuck, Charlie, and Jenn met up with Andrei’s close friend to interrogate him about Andrei’s sudden fleeing of his beloved country, Moldova, that left him to find a life in Ireland. Andrei’s close friend implied that him and Andrei was pressured to leave their unit, due to the corruption of the police force. He told us in more ways than one, that if you don’t go along with the corruption you could be set up and get sent to jail or worse, prison, because of the shady dealings of the police.

On To The Sneak Peek of 90 Day Fiance

Andrei tells that, yes, his friend was telling the truth and Andrei was no longer willing to do illegal deals to keep his job. It seems that this was a shock to even Libby, as she stares on and listens to the story unfold. The police do not earn more than $250 a month in salary and can work more than eighty hours a week, forcing most officers to turn to illegal activities to survive or get ahead.

According to Andrei, Many officers in Moldova feel like they have no other choice. Andrei explained to Libby, and the in-laws, that he and his friends would have no choice but to execute illegal orders if a higher rank told them to. They no longer wanted to do this and because of that, they felt they had to leave.

A post shared by Elizabeth Potthast Castravet (@elizabethpotthast) on Aug 30, 2020 at 2:01pm PDT

Will this change everyone’s thoughts?

This could make everyone decide that they like him a bit more. It will be interesting to see if her parents will change their minds at all. Libby has always seen the good sign of Andre even when her parent’s didn’t.

Make sure you don’t miss new episodes of 90 Day Fiance on TLC. So far this season has been full of drama.