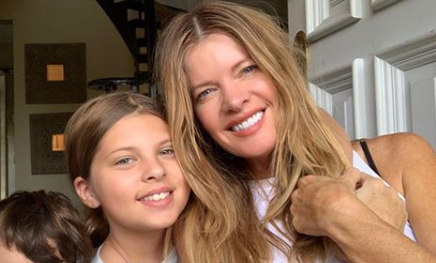 The Young and the Restless usually has a preview for the new week with several scenes, but the one for the upcoming week was just one scene featuring Michelle Stafford’s character Phyllis. The scene also features Nick (Josh Morrow), Kyle (Michael Mealor), and Summer (Hunter King).

Social media had a lot to say about the clip which featured the younger couple talking to Summer’s parents about something important. While Phyllis says she is ready to hear their big news, both she and her husband have some loud thoughts.

What Did Michelle Stafford And The Others Do In The Clip?

Nick and Phyllis are prepared to hear their news but before actually listening, Michelle Stafford’s character launches into her own thoughts about what they may be about to reveal. Phyllis says, “oh God, you’re engaged.” Nick says, “are you pregnant?” Phyllis finishes by saying, “or both?”

Summer and Kyle share exciting news with Nick and Phyllis this week…but you'll have to wait for it! 😉 Catch ALL-NEW episodes of #YR all week long on @cbstv and @cbsallaccess.

Summer’s parents seem concerned that she may be moving too fast with Kyle. Fans know the two are actually just moving in together. Summer tells her parents to, “slow their roll.” Nick then says that the two of them should slow down. Fans are going hard after this clip on Twitter, according to the Inquisitr. One fan wondered what would happen if they really did have big news.

They said, “I wonder what the reactions of both Nick and Phyllis will be when the time does eventually come for Kyle and Summer to tell them that they are engaged, Summer’s pregnancy, or that not only are they engaged but Summer is also pregnant. I love Skyle so much.”

Fans And Haters Of Both Couples Are Divided On The Scene

Some fans hated the clip with Michelle Stafford’s Phyllis looking exasperated. One posted, “This was hard to watch, don’t like either couple! So stupid. They’re moving in together, which we already know. I can’t stand Summer or Kyle!”

Of course, like most things, the show also has devoted fans that loved it. One fan of all involved said, “Yay, I cannot wait to watch this upcoming week! Let’s go, Kyle and Summer! Nick telling #Skyle to slow their roll is hilarious.” Another fan of the younger couple said, “I can’t wait for these scenes. I may not be a Phick fan, but I love them in scenes with #Skyle.” This fan used both sets of couple names.

Over 45,000 followers watched the video and 250 commented on it. One fan said, “the whole show has slowed its roll. Something exciting needs to happen on this show. The reruns were better!” Fans will still be tuning in this week to see how this conversation turns out and if they truly are revealing some off-screen secret.