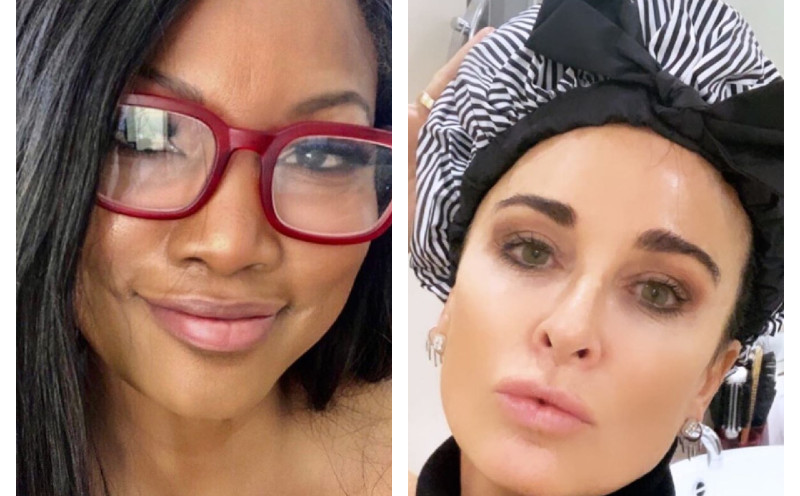 The Real Housewives of Beverly Hills may have disappointed fans this season, but one diamond holder did not. Newbie Garcelle Beauvais consistently earned the praise of fans for her candor and bluntness.

it's truly a joy watching garcelle beauvais become the queen of #RHOBH 👑 pic.twitter.com/uZO0til8Is

She did ruffle the feathers of fellow newbie Sutton Stracke by asking outright where Sutton gets her money. However, the two set aside their differences and became fast friends. On the other hand, RHOBH OG Kyle Richards and Garcelle got off on the wrong foot and never set it right.

Brandi Glanville was originally set to appear at the RHOBH virtual reunion. However, a last-minute decision from Bravo head honchos scrapped that plan. The network felt if Brandi was there, the focus would be on her allegations of an affair with Denise Richards.

Rather, Brandi will do a separate one-on-one interview with Andy Cohen. That gave the other RHOBH stars a chance to hash out their differences, including Kyle and Garcelle.

In the media blitz before the RHOBH Season 10 premiered, Garcelle told media outlets that Kyle wasn’t very welcoming. In fact, during an awards speech filmed for the cameras, Garcelle appeared to throw shade at Kyle by implying they aren’t friends.

However, Kyle continues to refute that she was unfriendly. The two appear to address it head-on, People reports. Kyle says to Garcelle that she’s “only said nice things” about the NYPD Blue actress. However, Garcelle quickly retorts that she’s “seen [Kyle’s] tweets” about her.

One of the several events featured on RHOBH this season was a charity event at Kyle Richards’ house. The event was attended by Kardashian matriarch Kris Jenner, as well as several former Bravo stars.

At the event, Garcelle vowed $5K for the charity. However, Kyle Richards says she nor the charity ever saw the money. When Kyle made the shocking accusation at the reunion, a shocked Garcelle responded “What?!” while Andy Cohen’s mouth dropped open.

Fans will have to tune in to the three-part RHOBH reunion to see how that confrontation ends. The rest of the trailer focused on Denise Richards and her feud with Lisa Rinna. In fact, it seems that Denise walked off camera at one point.

Our Diamonds are back together (virtually) for an epic 3-Part Reunion, and this time, the designer gloves are OFF on September 2!

Garcelle Beauvais’ most famous role is appearing alongside Eddie Murphy in Coming to America. She is currently filming the sequel, Coming 2 America. The original came out in 1988, long before Garcelle’s twin sons were born. (She has a 29-year-old son from a previous relationship.)

The RHOBH star took the boys and a couple of their friends to a drive-in showing of the classic 80s hit.

#anightatthedrivein it’s the boys first time ever at drivin and the movie is #comingtoamerica ha!! @amazonstudios #drivein

What do you think about Garcelle’s brewing feud with Kyle Richards? Tell us in the comments down below. Be sure to watch Part One of The Real Housewives of Beverly Hills reunion Wednesday, September 2, on Bravo.

Follow us on social media for updates on your favorite TV shows!