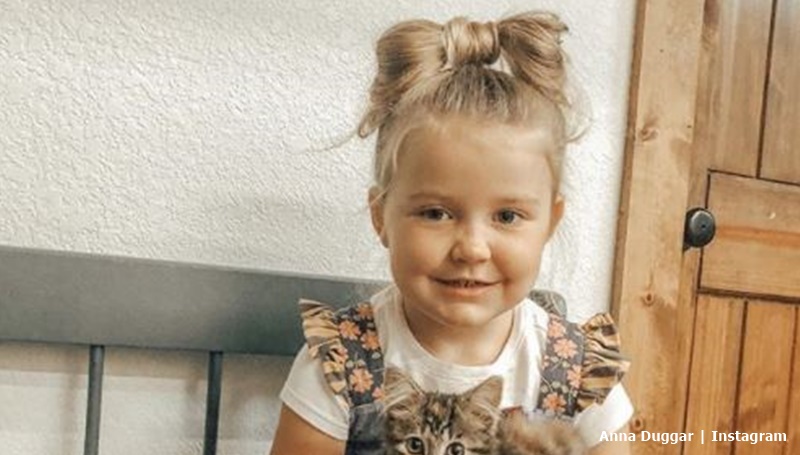 Anna Duggar beats the other moms hands down in styling her kids’ hair. Sometimes, fans see the other Duggar moms busy with home-cut hair. However, when it comes to her daughters, Anna takes it to the next level. But, a recent photo of Meredith irritated critics as they suggested it might hurt her.

We reported that Jessa Seewald and Joy-Anna Forsyth both gave their boys a trim. Practical, Joy-Anna revealed “on Instagram stories, that she gave Gideon a trim with the kitchen scissors.” But with Anna, she takes much more care. In fact, sometimes she turns out amazing thick braids on her daughters. Fans like it so much, that many of them ask for hair tutorials.

Earlier this past week, Monsters and Critics reported that Anna Duggar often shares photos of both “Mackynzie and Meredith with gorgeous hairdos.” So many requests for tutorials, possibly give her the confidence to try new things. Now, she shared a photo of Meredith with a hair bow. Many Counting On fans loved it. But, other TLC fans complained it probably hurts the little girl.

It’s always a good day when you get to babysit your cousins kitten! 🤎 • • • #littleduggars #meredith #kitten

Instagrammers rave about Meredith’s hair, but critics say it hurts

When Anna shared the latest photo showing Meredith with a hair bow, people on Instagram loved it. She captioned her photo with, “It’s always a good day when you get to babysit your cousins kitten! 🤎.” Straight away, fans noticed Meredith’s hair done up in a bow. Plenty of fans once again called for hair tutorials. Just one of many fans wrote, “Anna! Do a tutorial on the hairstyle!!”

But, over on Reddit, many critics felt the hairstyle probably made a lot of discomfort for Anna Duggar’s daughter. In fact, they mocked the Duggar family for taking thriftiness to extremes. One Redditor noted, “fabric hair bows don’t cut it anymore.” Another critic quipped, “Jim Bob has really tightened the purse strings 💰.#NoBudgetForBows,#LittleDuggarsWithoutBows.” But jokes aside, some people said hair bows might be painful.

One critic said that they once did their “hair like that for a Lady Gaga party a few years back. It freaking hurt after about an hour! Poor kid.” Others feel for Meredith because of the tangles. One noted, “did anybody else and/or their friends also do this to their hair in 2011? because, based on my memories, that is going to be f–king BRUTAL to take down/brush through the resulting tangles.”

A few other critics also commented on similar things about their kids hating the tangles after fancy hairdos. While Anna Duggar seems rather good at styling hair, do you agree that the girls might regret it when it comes to brushing it all out again? Sound off your thoughts in the comments below.