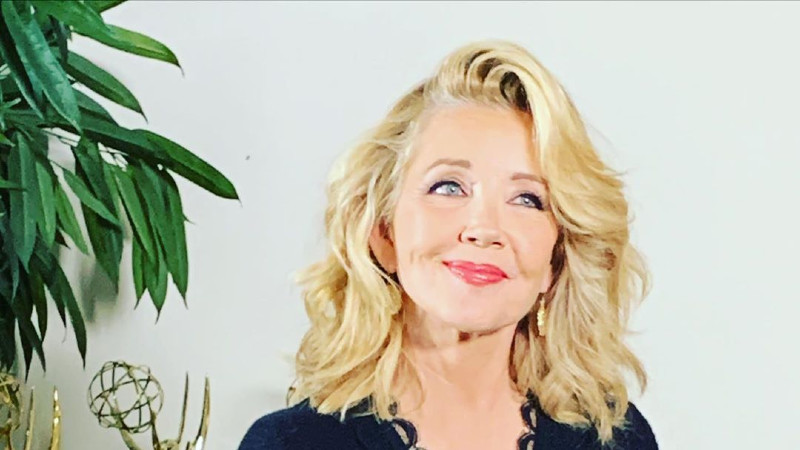 It’s a strange time for all of us. But nothing is quite as strange as the adjustments soap operas have had to make amid the coronavirus pandemic. Before production resumed, The Bold and the Beautiful outlined the odd ways they would circumvent social distancing using dolls and stand-ins. The Young and the Restless has their own ways to adhere to the CDC guidelines.

One of the guidelines limits the number of people on set at one time. That has led to some very… odd sights that fans are now seeing on-screen. Get ready to wig out!

Soap Stars Must Do Their Own Hair, Makeup and Clothes Styling

Y&R viewers were taken by surprise when new episodes of the soap began airing. Melody Thomas Scott has been playing Nikki Newman for over 40 years now. Fans expect her to look a certain way. However, in recent episodes, something was off about her usual golden locks.

No, her hair didn’t change color during the pandemic. Rather, the actress sports a dark blonde wig during her scenes on Y&R. Fans were thrown for a loop, but there is a reasonable explanation for the wig.

Distractify notes that soap stars are now responsible for doing their own hair and makeup. Previously, the stars would gather in the makeup room to get their glam done for the show. However, the makeup room is another victim of the coronavirus. Hopefully, only temporary. As the media outlet notes, male actors are wearing less makeup and appear “more scruffy than usual.”

(Yes, male actors wear makeup on screen. But they are less likely to do their own makeup than the actresses.)

Y&R fans took to Twitter to express their thoughts about the actress’s transformation. And, like the wig, the comments weren’t very flattering. One fan joked that it looks like a wig from Party City.

#YR got my girl Nikki looking like a damn edgeless mess wearing wigs from Party City.

Many fans felt that the wig was ill-fitting or styled wrong. One fan complained that the wigs are crooked. They asked, “WTF is going on?”

Nikki and her crooked wigs are sending me!!!!! Wtf is going on???#Yr pic.twitter.com/Li4CFD0n2L

One fan suggested a better quality of wigs, plus someone who knows how to put them on correctly.

The consensus among Y&R fans is that the wig is not a good look for the soap vet. In fact, one fan likened the wigs to a “tragedy.”

While soap fans were eager to get new episodes, they aren’t tuning in for some reason. Daytime Confidential reports that soap ratings are at an all-time low. This is despite the fact that all four of the soaps are now airing new episodes.

Previously, Days of Our Lives was the only sudser airing new episodes throughout the pandemic. GH, Y&R and B&B all had to dip into the archives to air classic episodes. Luckily for the NBC soap, DOOL films six months in advance. They won’t need to resume production until September.

Y&R viewers will soon see a new face. Actress Courtney Hope revealed on social media this week that she’s joining the soap. She previously appeared on The Bold and the Beautiful.

You can watch Nikki and her wig weekdays on The Young and the Restless, airing on CBS. Follow us on social media to keep up with the latest TV news.