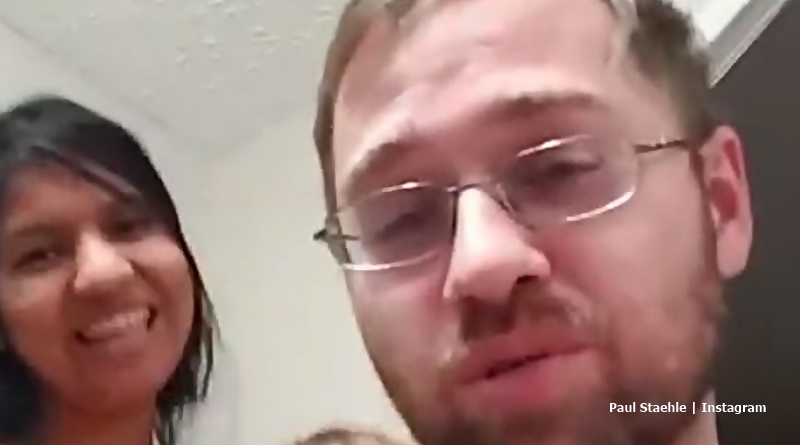 90 Day Fiance fans know that Paul Staehle and Karine Martins got into a huge fight. It all that ended with allegations he assaulted her. She disappeared with the baby and filed a restraining order against him. Following her allegations of assault, TLC fans started a petition to remove him from the show. Now, Paul blames social media for destroying his family.

We reported on the petition calling for TLC to remove Paul from the show. It came even before any of the abuse allegations got proven by the cops. Actually, it’s not unusual for fans of the franchise to condemn cast members before the outcome of police investigations. Geoffrey Paschel comes to mind as one very good example. Fans also factor in the fact that the show revealed Paul has a criminal past. His convictions include arson and he spent time behind bars

At one stage the 90 Day Fiance star’s mum called him “a deadbeat.” Nevertheless, he still retains many fans as plenty of them simply can’t stand Karine. As the calls for TLC to drop him do the rounds on social media, perhaps it’s not surprising that Paul now blames those platforms for destroying his family. Paul shared a post on his stories about it. Blogger John Yates shared a screenshot of one of the slides on his stories.

The card that Paul shared on his stories, said that he plans on “deactivating all [his] social media accounts soon.” He added. “my social media addiction…Caused me nothing but pain.” He went on, noting that it’s “time people put their phones and social media down and focus on [their] loved ones.” Finally, he urged fans not to “allow social media to destroy… relationships and family.” Naturally, fans of the TLC show commented on the post.

90 Day Fiance blogger, John Yates noted that getting off social media “is a very good idea.” While some fans think Paul spread his dirty laundry all over the web, others felt that leaving social media might not be a great idea for him. One follower said. “Paul do not deactivate your account.” In fact, they think that Paul needs people, “not isolation.” However, the follower tempered that by suggesting social media never ruined his family. Rather more practically they suggested,” I think you both need marital and individual counseling.” 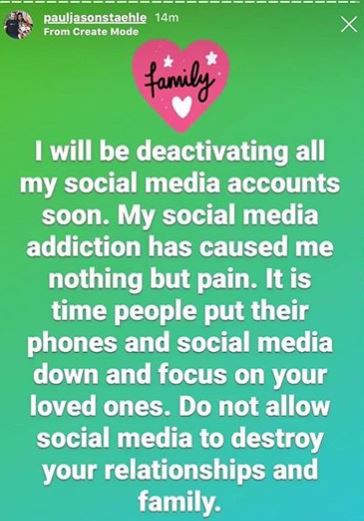 What do you think about Paul Staehle feeling that social media destroyed his family? Do you agree that much fault might lie at the 90 Day Fiance star’s feet? After all, he shared a lot of dirty laundry on various platforms. Sound off your thoughts in the comments below.