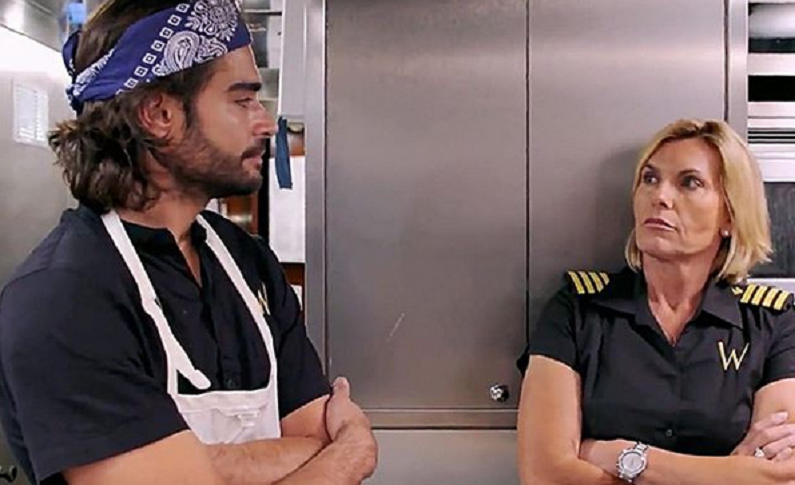 Below Deck Med star Captain Sandy Yawn is opening up her social media. She wants to discuss the recent outrage over Season 5 of Below Deck Mediterranean. An overwhelming majority of viewers aren’t happy with the captain and the other crew members on the show. On Tuesday, August 11, Sandy hopes to clear the air during an Instagram Live chat with viewers.

Recently, viewers criticized Sandy for her micromanaging and being critical of her crew members. Last week, she received backlash when she fired chef Hindrigo “Kiko” Lorran. While most looked forwards to the return of bosun Malia White, she’s received her share of backlash as well. Viewers feel she’s conspiring with Sandy to get rid of the people they don’t like.

Following Monday night’s episode of Below Deck Med, Captain Sandy Yawn said she wants to clear the air with the viewers. She doesn’t want to have any more bad vibes. On Monday night, Sandy took to Instagram to make a special announcement.

Hi everyone! I understand some of you are spitfire mad 😡 at me. I’m giving you the opportunity to jump on Facebook & Instagram live to share your feelings. In today’s world hate can be a cancer and it’s never my intention to hurt anyone on this planet. I know it’s hard to understand why things go down like they do and sometimes the person in charge can make some mistakes. That’s right we are all human beings trying to get it right everyday we wake up, dress up and show up to a very stressful job. Somedays are better than others. I’m open to all you criticism and concerns. This is your opportunity to have your say in person to me. #belowdeckmediterranean #belowdeckmed #belowdecksailing #belowdeck #bravotv #captainsandy #lifeisgood #leadership #mauijim #superyachts #taylorswift

In her post, Sandy explained that “it’s never my intention to hurt anyone on this planet.” Instead, she’s open to read everyone’s “criticisms and concerns.” Sandy wants to promote love than hate and hopes that the viewers will do the same. But, some feel that Sandy has no clue what she got herself into.

Sandy says she’s open to reading everyone’s criticism. However, she only opened up that conversation on her Instagram and Facebook accounts. It’s a different story  over on Twitter. Many Below Deck Med viewers claim that Sandy blocked them. Some shared their experience and even included screenshots.

“LMAO, @CaptSandyYawn blocked me!” one follower wrote. “@BravoWWHL @Andy. Classic. She is completely unprofessional, immature, and a bad leader.”

That came after the user tweeted the following comments about the captain’s work ethics:

“Disappointed @CaptSandyYawn. You give women managers a bad name, make it much harder for women leaders to emerge,” the fan exclaimed. “Your micromanagement & belittling approach is not leadership. You are supposed to inspire, not torture others. @Andy @BravoWWHL.”

Here are more tweets from Below Deck Med viewers who claim that Sandy blocked them. This happened shortly after her Instagram announcement.

Captain sandy blocked me cuz she can't handle the truth.

I want to believe you, yet I can't. I'm not watching #BelowDeckMed anymore because of you, @CaptSandyYawn (who has blocked me), and Malia. Firing Kiko to give Malia's boyfriend the job, and firing Hannah so you can be Chief – not good in my book.

The Below Deck Med bosun caught the heat following Monday night’s episode. She sent Sandy a picture of the contents inside chief stew Hannah Ferrier’s handbag. Viewers accused Malia of setting Hannah up after arguing over the room arrangements. Malia wanted to bunk with her boyfriend Tom Checketts, but she had to get past Hannah first.

Hannah wouldn’t budge, and then Malia retaliated. The bosun last defended her actions on Instagram, claiming she was following Maritime law. Not only did Malia delete the negative comments, but she also turned off comments.

So, Malia deleted the comments on her IG account. She is the WORST. She needs to be FIRED @BravoTV @BravoWWHL @Andy #BelowDeckMed #FireMalia pic.twitter.com/o0IfxDp0KH

It’ll be interesting to see how some of these stars will move past the backlash.