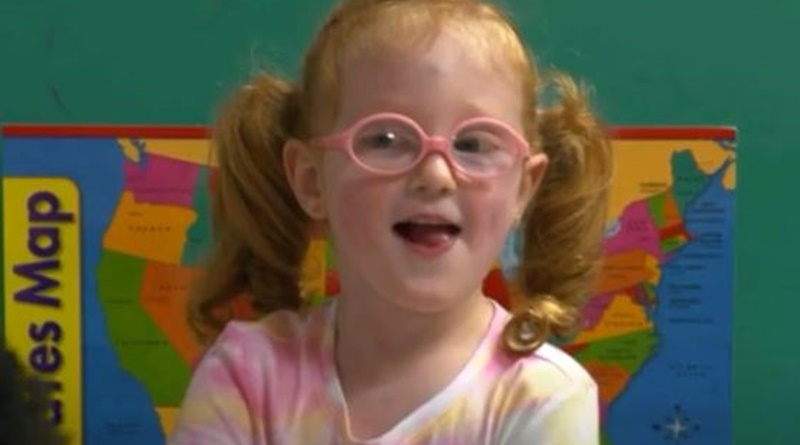 OutDaughtered fans heard that Hazel declared her love for a boy in her class at school. In the last season, the show covered them all going to school. Actually, despite her sisters and uncle Dale teasing her, Hazel stood by her declaration of love. Now, her boyfriend Graham turned five years old. And of course, standing next to him, was little Hazel.

We reported ahead of the last season, that fans couldn’t wait for it. The family-friendly show also engaged people more during the long coronavirus quarantine. And, the quints turned five. So, they have started showing their very different personalities. Hazel’s a favorite as fans all know she wears glasses and suffers from an eye condition. Also, with her red hair, she’s easily identifiable.

But the OutDaughtered cutie-pie also set herself apart when she announced she has a boyfriend. Recall that Adam and Danielle felt the kids should each attend separate classes at school. It meant that they could interact with kids other than their own siblings. Hazel ended up in a class with Graham, the tallest boy. Meaww reported that Adam revealed his name’s Graham. And, Danielle spoke about how they know the family very well. No matter how much the girls tease her, Hazel remains steadfast in her love for him.

On Saturday, August 7, Danielle shared a photo of the kids with Graham. It showed Hazel right there with her arm around him. Danielle captioned it with, “Happy 5th Birthday Graham! *you better believe Hazel had to stand right next to him 🤪❤️.” Clearly, Hazel’s little crush hasn’t worn off yet! Fans loved the photo and one said, “😂happy birthday Graham!!🎂 if hazel and Graham don’t end up together my heart will be broken. 😂😂cutest couple out there!!😍❤️.”

Another OutDaughtered fan wrote, “So, Hazel is dating😳! No pandemic will get in the way of her crush👍❤ I love these outfits, such pretty girls and Happy Birthday, Graham, you are a lucky guy❤.” The photo revealed Riley, Parker, Hazel, Ava, and Oliva all stand shy of his height. They already turned five so Graham’s a little bit younger than them. One fan joked that Hazel found herself a “toy boy.” But, she clarified it comes with a slightly different meaning in the UK and is a term of endearment for a younger boyfriend.

Happy 5th Birthday Graham! *you better believe Hazel had to stand right next to him 🤪❤️ #hazelbff #friends #itsabuzzworld #summervibes

Is it okay for a young child to have a boyfriend?

Plenty of birthday wishes went Graham’s way from OutDaughtered fans. And, many of them also loved the cute photo of the kids. Actually, it’s not uncommon for kids this age to declare they love someone. Parents.com reports that  “You don’t have to discourage or encourage the crush. It’s enough to just let the child know it’s okay.”

What do you think about Hazel’s boyfriend? How old were you when our first crushed on a boy or girl? Sound off in the comments below.

Savannah Chrisley & Nic Kerdiles CONFIRM They Are Living Together?!
Could Hallmark, Lifetime Christmas Movies Be Canceled Due To Hollywood Strike?
‘RHOBH’: Tom Girardi Seemingly Implicates Erika Jayne In Legal Drama, Says She Knew
Kendall Long Speaks Out After Painful ‘BIP’ Exit
‘The Simpsons’: When Is The Season 33 Release Date?