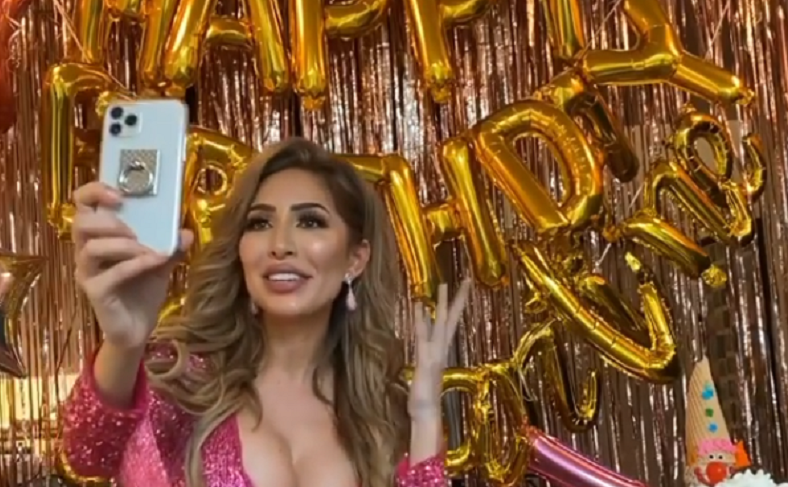 Farrah Abraham caused controversy once again. The Teen Mom OG star has been questioned for her parenting practices. Now, Farrah’s followers aren’t happy with 11-year-old Sophia having “long nails.” The mom-shamers came out in full force.

Followers noticed the young girl’s manicure in her latest social media videos. Farrah and Sophia love posting videos on Instagram and TikTok. It’s all they spend their time doing. Their latest video had fans concerned about her preteen daughter.

Some think she’s growing up way too fast. This comes after Farrah announced that she will homeschool her child. But fans argued that Sophia hasn’t attended school in years.

Followers noticed Sophia’s nails in the new videos posted to Instagram and TikTok. They slammed Farrah Abraham for giving her daughter “long nails,” as per In Touch Weekly.

“Those long nails aren’t cute. They really don’t look good on a young girl, but I’m going to assume you’re having fun in summer and it’s not an everyday look,” one follower wrote.

“What little girl needs that long of nails?” another added.

However, Farrah hasn’t responded to the backlash. She regularly receives complaints about her parenting skills. Followers don’t like the way she behaves and dresses around her young daughter.

She also brought Sophia to her Botox appointment

In lieu of the controversy, Farrah Abraham brought her daughter for her Botox appointment on Monday, August 3. Earlier this year, the MTV star took a brief break from plastic surgery. The 29-year-old wore a provocative outfit while out in Beverly Hills with Sophia. As per The Blast, Farrah wore a white one-shoulder cropped top and tight white pants. The outfit highlighted her famous curves.

She also wore her hair styled down with a black headband. Farrah enjoyed the attention she received from the paparazzi as she walked along the sidewalk. Showing that she’s staying safe during the pandemic, the former reality star wore latex gloves and a black lace face mask.

Sophia also looked out for her own health. She wore a mask similar in style to her mom. The Best Friends singer also wore a sweatsuit with a YSL crocodile crossbody bag. Farrah went to see Hollywood plastic surgeon, Dr. Sheila Nazarian. She even documented her appointment on her Instagram Stories. As TV Shows Ace previously reported, Farrah went to Dr. Nazarian for vaginal rejuvenation.

In her latest clip, Farrah explained to her followers that she’s been suffering from chronic headaches. They’re so bad that she finds it hard to sleep at night. She also went to the doctor for her lockjaw problem. He injected temporary muscle relaxers into Farrah’s face that last up to five months. Meanwhile, Sophia watches the entire procedure.

Farrah has been questioned for her parenting skills in the past few months. Some of her followers feel that she’s exposed her young child to too much, too soon.

Ready To Ride Into The Sunset With Hallmark’s ‘Taking The Reins’?
Farrah Abraham Shares Cryptic Quote, Reveals Being Ready To ‘Release Negative Thoughts’ Of Her Past
Jennifer Aniston Reveals She Is Not Attending The Emmys This Year And Why
Here’s Why Producers Chose Clayton Echard For ‘The Bachelor’
Duggar Kids Throw Shade At Michelle On Her 55th Birthday