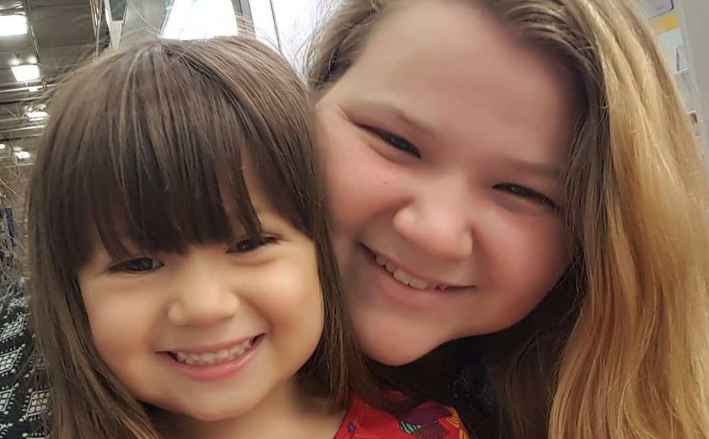 90 Day Fiancé alum Nicole Nafziger has been stuck in Morocco since the start of the COVID-19 pandemic in March. She was in the country to visit with her fiancé, Azan Tefou (a.k.a. Hassan M’Raouni) when the country locked down. While she appears to still be happy in her relationship with Azan, she is missing her daughter, May. The only contact she has right now is by Facetiming her daughter. It isn’t the same and she is longing to be with her again.

Many fans of the TLC reality show have criticized Nicole for being away from her daughter for so long. However, under the circumstances, Nafziger can hardly do anything different right now. As she gets closer to leaving Morocco, Nicole is becoming concerned that her flight from Morocco to the US will be canceled.

In an effort to get some clarity, Nicole took to the “U.S. Citizens trapped in Morocco” Facebook group for assistance. Her posting was spotted on the public group by 90DF blogger John Yates.

Initially, Nicole posts to ask if anyone has traveled from a different city to Casablanca for their flight. The 90 Day Fiancé star writes that this is since Casablanca was closed from inward or outward flights. Nicole continues, writing, “What did you have to get to travel to Casablanca? Something from the police or from American embassy? Thanks.” 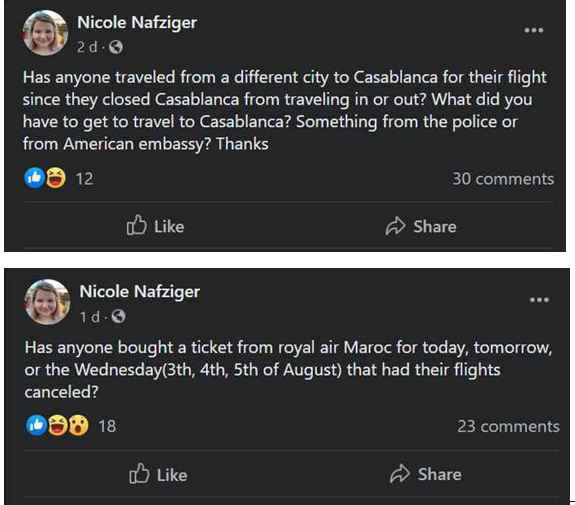 Nicole receives responses from other members of the group. They advise the 90 Day Fiancé alum to seek approval from local authorities due to the travel restrictions currently in place.

In a recent post, In Touch looked at the foreign travel advice relating to Morocco on GOV.UK. As of July 26, visitors are only allowed to fly if they have an urgent medical need. Alternatively, if they are required to travel for work, with a letter from their employer.

The next day, Nicole makes a second post to the group, writing, “Has anyone bought a ticket from royal air Maroc for today, tomorrow, or the Wednesday (3th, 4th, 5th of August) that had their flights canceled?”

Responding to one commenter, Nicole writes that she saw on the app that flights for the 3rd and 4th have a canceled status, so she is worried.

Nicole is getting closer to being with May

It has been a trying time for Nicole, spending quarantine in Morocco. However, it does look like she is getting closer to returning to America. After being in the country since March, the TLC reality alum is looking forward to being with May again. Children grow up so fast and it is difficult to be away from them for months at a time.

So happy to have had this extra time with you, my love♥️ But soon I’ll get to see my little girl and I’m also very happy and excited for that♥️

Nicole posts an image of herself and Azan on Instagram on July 25.  She captions it to say how happy she has been to spend extra time with Azan, her love. However, the 90 Day Fiancé alum does say she is happy and excited to get to see her little girl again. In the meantime, her mother has been caring for her daughter back home.