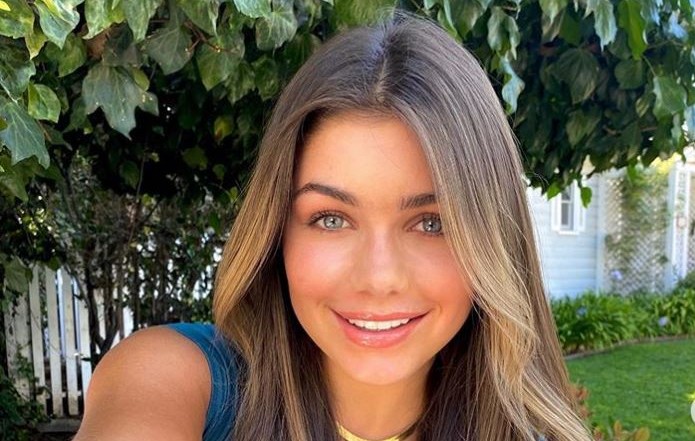 Plot twist! Again! New reports are surfacing that Hannah Ann Sluss was seen arriving at The LaQuinta Resort where The Bachelorette is being filmed. Her arrival comes on the heels of news that Tayshia Adams is replacing Clare Crawley as the lead. So now the question remains, why would Hannah Ann be at the resort? This is really leading up to the most dramatic season of the show ever!

US Weekly was able to obtain photos that prove Hannah Ann is at the La Quinta Resort and Club in California. She was seen arriving with a large suitcase and her purse. Hannah Ann was also photographed talking to producer Julie LaPlaca.

Hannah Ann arrived just one day after multiple news outlets confirmed Tayshia Adams would be taking over for Clare Crawley. Clare reportedly found love with one of the contestants. She asked to leave because she didn’t feel it was fair to lead the men or her fans on. So, Tayshia was reportedly brought in to take over and finish out the season.

Hannah Ann just shared a post just yesterday hanging out with some good friends. Now, she is at the La Quinta Resort. An insider said, “This season is so off the wall that absolutely anything and everything is on the table.” They went on to say, “Producers continue to reach out to women from the franchise in an attempt to salvage a season that just might be the most dramatic ever.”

What could this all mean? Following is what Reality Steve had to say about Hannah Ann’s arrival. He said, “The situation is getting weirder by the day. Now Hannah Ann is there with a giant suitcase in tow? Oh boy.”

According to @usweekly Hanna Ann was spotted at La Quinta resort in California where filming for the bachelorette is happening! That is a pretty big suitcase for someone who is just visiting 👀 📸: @usweekly • • • • #thebachelor #thebachelorette #bachelornation #bachelorinparadise #bachelorspoilers #mattjames #realitysteve #BIP #usweekly

A post shared by Bachelor/Bachelorette Spoilers (@bachelor.nation.tea) on Aug 4, 2020 at 7:23pm PDT

Another Bachelorette reportedly at the resort

And, the plot thickens even more. Many are reporting that they believe former Bachelorette Becca Kufrin is also at the resort. Some fans were able to match up bracelets, doorways and windows to what is featured at the resort. If she is there, Becca’s presence comes amid rumors she and Garrett Yrigoyen have broken up.

Why Hannah Ann and Becca would be there with Tayhsia is anyone’s guess at the moment. Could they be offering up advice? Or are they somehow going to be involved with this season?

Previously US Weekly also confirmed that producers were reaching out to some of the men not chosen on the show. They were hoping to bring them back. At first nobody knew why, now it is becoming all too clear it was to compete for another leading lady’s heart.

Stay tuned for more details and spoilers as they emerge. The Bachelorette is scheduled to air this fall, Tuesday’s on ABC.

Hallmark’s Countdown To Christmas 2021 Includes 41 Holiday Movies
‘Below Deck Med’: What Made Lexi Wilson Fire Back At Producers?
‘Welcome To Plathville’ Olivia, Kim And Barry Have A Serious Talk
Savannah Chrisley’s Jaw DROPS, Nanny Faye Hid Her Flask Where?!
Wells Adams Will Not Be Taking Over For Chris Harrison