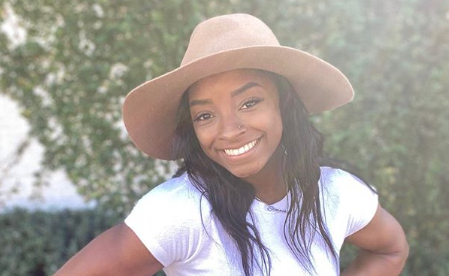 We may be lamenting that the Summer Olympics were canceled this year, but Simone Biles has turned in a gold medal worth post on Instagram. The Olympic-gold-medal gymnast used her Instagram platform to confirm the rumors about her relationship with Houston Texans’ Safety Jonathan Owens.

The Rumors are True

Simone got the rumor mill going when she posted a birthday tribute to Owens on July 25th. The Shade Room post showed Biles getting a piggyback ride from Owens. And she captioned the photo, “Hope this year brings you everything you want & more.”

Okay now!! #SimoneBiles out here kickin’ it with #JonathanOwens from the Houston Texans!! 👀

The twenty-three-year-old gymnast was all smiles as she posed for two photos with Owens. One picture shows both Owens and Biles hugging and smiling at the camera; while the second photo appears more candid with Owens sneaking a kiss. But either way Biles’s smile in both photos is hard to deny.

They say a picture is worth a thousand words. So maybe that is why all Biles had to say in the caption was, “it’s just us.”

The new relationship might seem a little fast though; as Biles only confirmed she and former boyfriend Stacey Ervin Jr. split in the recently released August edition of Vogue Magazine. In her cover issue of Vogue Simone stated, “It’s hard being young and having that long of a relationship and then ending it. But it was for the best.”

Biles and Ervin Jr started dating in 2017. But rumors that there was trouble in paradise started when Stacey failed to wish Biles a happy twenty-third birthday in March. During her interview, Biles confirmed the couple did part ways in March. So, maybe it’s not too soon for a new relationship.

Biles and Ervin Jr. dated for three years and it was only last October that Simone gushed over him in another Instagram post while wishing him a happy birthday.

“Happy birthday to the man of my dreams. So many things I love about you. Your energy lights up an entire room. you’re a true gentleman and you always put others first. Your mindset, grit and your passion for greatness. 26 will be a great one! Never stop being you Stacey Ervin Jr. I love you.”

you and me. it’s a forever kinda thing 🖤

Another earlier post includes the two holding hands with the caption “you and me. it’s a forever kind of thing.”

Three years is a long relationship especially when couples are young and serious athletes as these two were. The saying is that everything happens for a reason and after some time Simone seems to have found happiness again with Jonathan. We only wish them all the best.