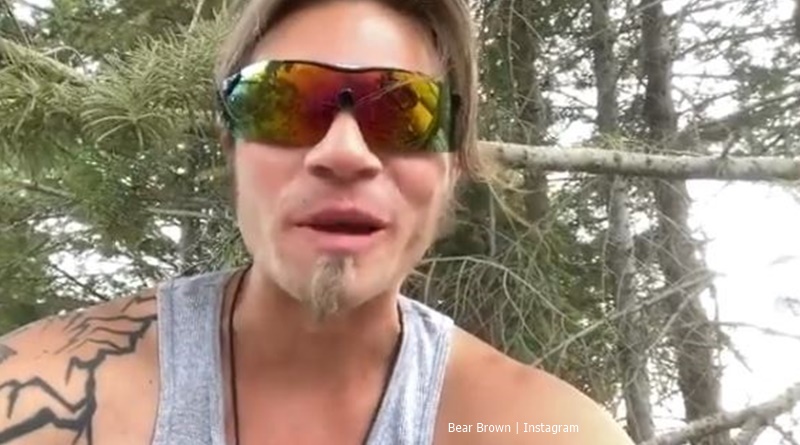 ABP fans know that Bear Brown and Raiven Adams ran into difficulties. In fact, she accused him of abuse and drugs. Meanwhile, he claimed she only told him about his son’s birth days after he arrived. Bear never yet held his son. But, he took to Instagram on Saturday and told his Alaskan Bush People fans he might soon hold him for the first time.

The news from the Alaskan Bush People star came via his Instagram. He shared a short video and talked about River, his baby boy. Bear said, “Hey everybody, I’ve got some news.” Then he noted, “It looks like I am finally going to be able to visit River.” Next, he talked about how he just hopes to “rock him to sleep.” And, just “holding him” sounds very special. Bear also said he can’t give all the details now. But, he hopes that soon, he brings an update on it all.

Many fans reacted to the happy news from the ABP star. one wrote, ” awesome possum!!!!!! Raven thought she could stop u. But Nope. Bearman has tenacity and perseverance. Glad u get to now. Keep on making sure you can be in his life cus i know how much father/son relationship mean to u………just seeing urs with Billy.” Many others commented on how happy Bear looks right now. And they sound right. Bear smiles a huge smile in the video.

While facing a brutal winter that threatens the family’s progress on the ranch, the Browns are more determined than ever to protect their dream.

Recently, we reported that Bear got fed up with Raiven allegedly lying about him. He went off and took a tissue drug test for cocaine and others. And, the ABP star came up clean. The test goes back quite far in time, so covered at least the previous 90 days. She alleged he came at her with abusive behavior. But Baby Gaga reported that he claimed the reverse. In fact, he alleged the substance abuse came from her and not from him. Originally, people thought he filed a paternity test to deny he’s the dad. But Bear claimed the opposite with that as well.

Bear hoped his son really came from him. And, he never yet even spent a second holding his son. Fans really hope for a good ending for Bear Brown. In fact, the Discovery Channel star gets a lot of encouragement from his fans during this difficult time. Actually, many fans seem genuinely happy for the ABP star. Hopefully, one day, they’ll see Bear taking his boy out into the wilderness to enjoy some dad time. Others think he’ll make a fantastic dad.

What do you think about the possibility that ABP star Bear may soon hold his son River for the first time? Sound off in the comments below.