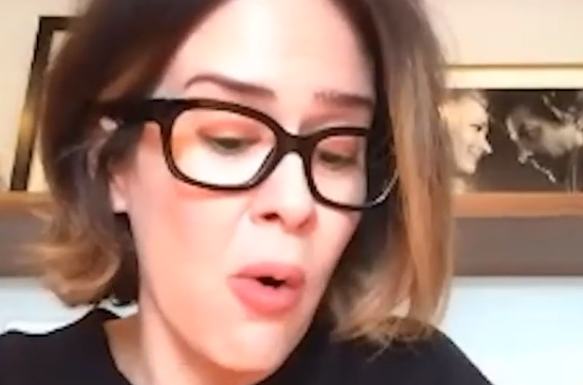 American Horror Story fans will wait a little longer for the new season to drop, but there is some good news. AHS veteran Sarah Paulson will star in Ratched, which you can see on Netflix beginning September 18. Ratched is another show by AHS creator, Ryan Murphy. Many think seasoned AHS fans will enjoy this new series too.

Ratched tells the story of asylum nurse Mildred Ratched, played by Sarah Paulson. Nurse Ratched is a character in the iconic novel and film, One Flew Over the Cuckoo’s Nest. Louise Fletcher originated the role in the 1975 film.

It looks like Sarah Paulson will be in good company with this talented cast. If you don’t know much about One Flew Over the Cuckoo’s Nest, you may not know what to expect from this new show. Here’s the official synopsis:

“In 1947, Mildred arrives in Northern California to seek employment at a leading psychiatric hospital where new and unsettling experiments have begun on the human mind. On a clandestine mission, Mildred presents herself as the perfect image of what a dedicated nurse should be, but the wheels are always turning and as she begins to infiltrate the mental health care system and those within it, Mildred’s stylish exterior belies a growing darkness that has long been smoldering within, revealing that true monsters are made, not born.”

As per usual, Ryan Murphy will be sticking to his darker themes. Fans are honestly really excited to see how Ratched turns out. Will you be watching?

The Future of American Horror Story

Even though it’s been on for several years, American Horror Story is still going strong with fans. Creator Ryan Murphy kept busy during quarantine, brainstorming new and fun ideas. One plan is a mini-series with stand-alone episodes called American Horror Stories.

from the mind of @mrrpmurphy comes “american horror stories.” a new one-hour nightmare every week.

Everyone planned for Season 10 to premiere in October. However, the pandemic had a dramatic effect on filming and production schedules. No one can say for sure when it will air. Right now, FX plans for 2021. But one thing is certain, when it does air, it will be spectacular.

We can’t express how excited we are for Sarah Paulson’s latest role. Let us know in the comments what you think of this new, spooky idea. As always, check back with TV Shows Ace for more celebrity and television news.

Is ‘American Pickers’ Co-Star Is Behind Mike Wolfe’s Recent Breakup?
‘Below Deck Med’: Captain Sandy Didn’t Know The Whole Story About Lexi
‘Prisoner Of Love’ Season 1 Finale SPOILERS!
Why Kim Kardashian Claims She Is Moving Out Of Her $60M Mansion
Get To Know ‘The Bachelor’ 2022 Clayton Echard