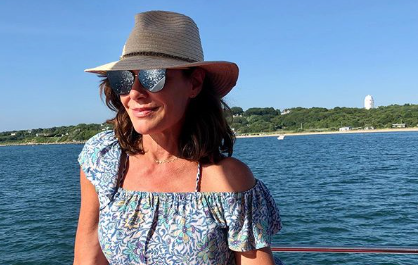 On an episode of “I Can Explain,” from US Weekly, Luann de Lesseps talked about hosting a party with Teresa Giudice earlier in the year. She said the two housewives still keep in touch. Lesseps said she doesn’t mind mingling with the Real Housewives of New Jersey star even though New York is her stomping ground.

When describing some of her Instagram posts, the fifty-five year old said, “I love Teresa. That was at Slate. We were hosting a party together. Teresa is cool. I like her. She’s a strong woman. She actually called me, I don’t know, like a couple of weeks ago and said, ‘I might be coming to the Hamptons, so I’d love to see you.’”

The Real Housewives of New York star actually has a lot in common with the RHONJ star. According to US Weekly Teresa reached out to Luann De Lesseps for her advice on going through a high-profile divorce. For awhile not only did Teresa have to deal with the stress of her marriage constantly being in the news, but also with her husband dealing with being deported.

De Lesseps split with her husband Tom D’Agostino Jr. in 2017 after less than a year of marriage. Teresa’s marriage to Joe fell apart during his deportation battle which eventually saw him going back to Italy. The two have four daughters from ages ten to nineteen. De Lesseps thinks Teresa is a pillar of strength for going through all she has. Both women have also had some legal trouble as well. Teresa Giudice also had to deal publicly with the media when she went to prison for fraud.

The Reality Star Is Glad She’s Not Still Drinking

Luann De Lesseps has also had run-ins with the law, especially related to alcohol. The star finally checked into rehab after being arrested and charged in 2017 with battery, trespassing, and disorderly intoxication. De Lesseps only got probation and community service.

She also explained some other pictures on her Instagram. There’s a picture of Luann with Lin Manuel Miranda at the opening of “Fosse/Verdon,” with FX. She ran into the Hamilton star at the after-party. She also commented on a video of her and James Kennedy from Vanderpump Rules DJing at a party. After quarantine the two ladies will likely get together and discuss how much life has changed. For now fans are happy with the virtual interviews they keep getting.

Wait, What? Does Isabel Roloff Plan To Raise Her Baby In A Van?
Is This A Sign ‘Bringing Up Bates’ Will Be Canceled?
Katie Thurston Shares Intimate Details About How She Got Chest Scar
‘The Bold & The Beautiful’ Spoilers, July 26-30, 2021: Finn Gets A Family
Tyler Cameron Gets Real About Hannah Brown Fantasy Suite & New Girlfriend