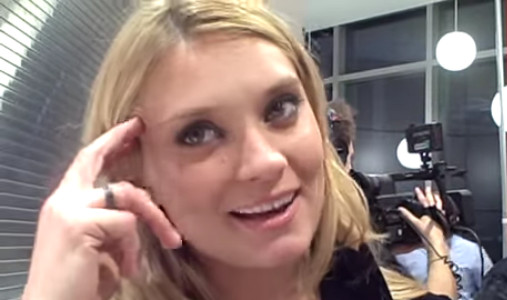 Spencer Grammer, 36, was involved in a very dangerous situation recently. The daughter of veteran actor Kelsey Grammer was at a restaurant in New York when it happened. According to law enforcement, the situation unfolded at The Black Ant in the East Village at closing time. The allegedly drunk suspect demanded service. However, staff turned him away because of his condition and the fact they were about to close up. As a result, the suspect pulled out a knife and began attacking staff and restaurant patrons in a violent frenzy, Spencer and her friend included.

Spencer Grammer Reportedly Tried to Save Others

According to some sources, Spencer and her friend tried to subdue the man and were hurt in the process. Spencer suffered knife wounds to her arm and her friend to her back. They sought treatment at the hospital for non-life-threatening injuries.

After the attack, the suspect apparently ran away on foot. Law enforcement is investigating the violent incident. We hope Spencer and all the other injured make a full recovery. These are certainly scary times we live in!

Even if you haven’t heard Spencer Grammer’s name before, you’re probably familiar with her work. She comes from a pretty famous family too.

Ricky and Morty fans recognize Spencer Grammer as the voice of Summer Smith. If you were a fan of ABC Family, you probably recognize her as Casey Cartwright from Greek.

Spencer’s dad, Kelsey Grammer, has decades of acting experience under his belt. Most of his fans know him as Dr. Frasier Crane, a role he played for 20 years between Cheers and its spinoff, Frasier. His voice acting work includes roles in  The Simpsons, Anastasia, and Toy Story 2.

Spencer was born to Kelsey and his first wife, Doreen Alderman. However, after his divorce with Doreen, Kelsey married an additional three times. You may be a little more familiar with his third wife, Camille Grammer, one of the stars of The Real Housewives of Beverly Hills.

Kelsey and Camille Grammer married in 1997 and divorced in 2011. The two are not on the best of terms. In an interview, the host recently asked Kelsey about his relationship with Camille. He responded he doesn’t like to talk about her much anymore.

“So much of her life is spent talking about me and I just think it’s sort of pathetic,” he bluntly replied. Kelsey Grammer married Katye Walsh in 2011 and seems much happier these days.

We sincerely wish Spencer Grammer the best in her recovery. We do not know how severe the knife wounds were, but we don’t imagine it will be an easy healing process. Even when her arm heals up, the horrible memories could stick around for a lot longer. Hopefully, the authorities will catch the man and bring him to justice.

To keep up with more celebrity news, make sure to follow TV Shows Ace.