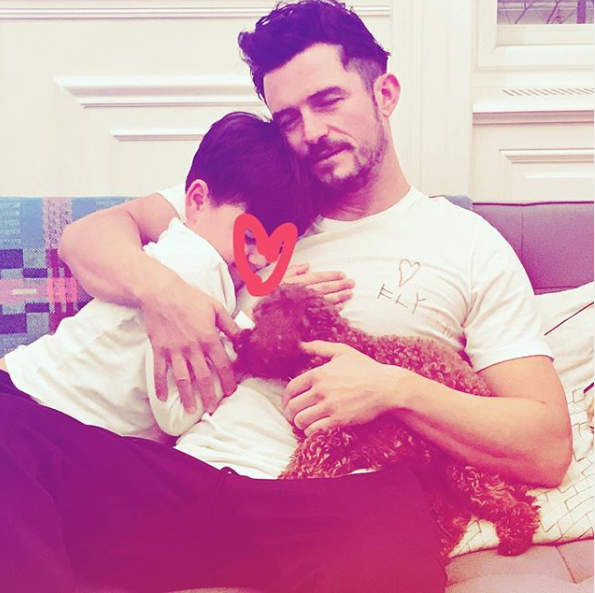 Carnival Row star, Orlando Bloom and fiance Katy Perry’s dog Mighty is Missing. The power couple are hoping for their pup’s safe return home. In an effort to spread the word about Mighty, Bloom took to Instagram to sound the alarm and ask for the help of friends and followers in his area.

Bloom’s post, which went live early afternoon on Wednesday, has more than 224,000 likes and several thousand comments from fans showering the couple with well wishes for their furbaby’s return home.

“MIGHTY IS MISSING,” the actor writes in bold letters.  Bloom says Mighty has a collar and microchip to help locate him in emergencies.

According to ET the famous duo are very attached to their tiny labradoodle and sincerely want him to come home. Bloom goes so far as to offer compensation for the person who returns him.

“–if you take him to your local vet or shelter or police station he can be traced back to me for a reward,” The Pirates of the Carribbean alum remarks. He goes on to plead for followers to only send valid information as to not exacerbate his and Katy Perry’s emotional state. “Please only send REAL INFO my heart is already broken so please don’t add insult to injury.”

As of the time of this post, the actor nor fiance, pop superstar Katy Perry, has remarked on what kind of reward they are offering. Most assume it is monetary but that has not been confirmed.

Match Made in Puppy Heaven

When Bloom first started posting pictures of Mighty on social media, many thought he was snapping pics with Katy Perry’s nearly identical pup, Nugget. The two appear uncannily similar in size, color and hairdo’. That proved not to be the case. Later on, the two would share snapshots of themselves on facetime each holding their own tiny pup.

‘Mighty’ made his way into the picture in 2017 when Orlando and Katy were taking a break from their relationship. According to ET Bloom got the dog at the request of then 6-year-old son,  Flynn.  Bloom admits that Mighty was definitely not the dog he himself would have chosen. He goes on to must that it seems that instead, Mighhty chose them and he couldn’t be happier about it.

Bloom spoke of his relationship with mighty in a 2017 interview with British radio host Nick Grimshaw. Orlando gushed. “I’m obsessed. I’ve started to Instagram — I just do stories of the dog the whole time,” Bloom added, joking, “I think it roughens my masculine edges.”

Keep checking with TV Shows Ace for updates on Mighty’s disappearance and news on all your favorite television stars and shows!