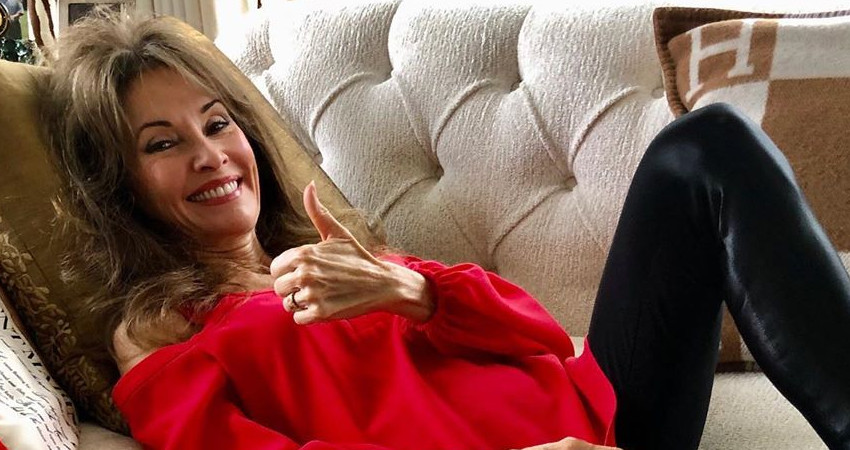 All My Children has been off the air for almost 10 years now but fans still clamor for Erica Kane. Susan Lucci played the iconic role on the ABC soap for more than 40 years. The show was cancelled in 2011. While Susan Lucci was supposed to make an appearance on the Prospect Park revival of AMC, it never came about because the show was cancelled again.

Fans last saw the soap star during ABC’s Story of the Soaps in May. The tribute to soaps had high ratings, but Bravo’s Andy Cohen made fans angry by comparing soaps to reality television.

In 2018, Susan Lucci made headlines by posing in a Michael Kors swimsuit at the age of 71 for a Harper’s Bazaar shoot. Two years later, the soap actress slips into the swimsuit once again to recreate the look, People reports.

The buzz surrounding the 2018 shoot was due, partly, because the photo was without retouching. The recreation doesn’t specify if the photo is using retouching or not. For a caption, she simply writes, “Happy Sunday!”

Fans and former co-stars flooded the comments with praise for Susan. Many comments included praise such as “beautiful,” “stunning,” and “gorgeous.” One follower wrote that Susan “looks 25” in the snapshot.

The actress has had a few screen credits since the end of All My Children. She appeared on Lifetime’s Devious Maids from 2013 to 2016. She guest-starred on Hulu’s Difficult People in 2017.

Back in 2008, Susan did All My Children and Dancing With The Stars at the same time. She came in 6th place on the ABC dance competition.

Susan was featured on The Story of Soaps last month. While she still acts, her main focus seems to be working with the American Heart Association.

In 2018, chest pain led Susan to seek medical attention. It turned out that she had two blocked arteries in her heart and needed emergency surgery. The surgeon team put two stents in Susan’s heart. She kept quiet about her medical problems until the 2019 when she spoke out in support of the Go Red For Women event.

Since that time, she’s worked closely with the American Heart Association. In fact, several of her Instagram posts make reference to “filming” a project from home. In response to a fan’s question, Susan revealed that she’s working on a “virtual performance.”

The performance will involve “powerful pieces” from patients of the Memorial Sloan Kettering. The hospital has a program called Visible Ink that pairs patients with experienced writers to tell their stories. Visible Ink has an annual live performance of the written pieces.

However, due to COVID-19, the stories will be performed virtually.