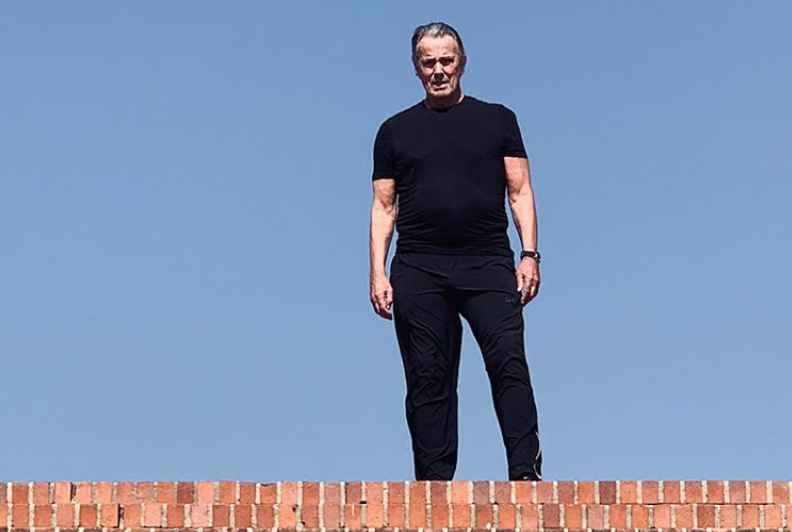 The Young and the Restless fans cannot wait for the CBS Daytime drama to begin to air again. Now they have a little hope, as Eric Braeden shares an image on Twitter. The photo shows him standing with Anthony Morina, the Y&R executive producer, outside CBS Television Studio. This is where the soap opera is filming.

Eric Braeden gives hope to Young and the Restless fans

The image tweeted by Eric Braeden shows him standing, wearing dark jeans and a dark T-shirt. He is sporting a bandanna as a protective covering on his face against COVID-19. The soap star also wears a snazzy pair of aviator-style sunglasses, with his hair slicked back from his face.

Y&R executive producer Anthony Morina stands next to Eric, also sporting dark pants, but with a white T-shirt. A white mask over his face is protecting his mouth and nose. The Young and the Restless exec producer also wears a pair of sunglasses against the bright sun.

At CBS FOR COVID 19 testing! Next to me is TONY MORINA, our EXECUTIVE PRODUCER! pic.twitter.com/FtAYSboN6x

The soap actor writes in his caption that he is at CBS for COVID-19 testing. Eric wants to ensure fans recognize them both with their face coverings. He notes he is standing next to Tony Morina, their executive producer.

As noted by the Inquisitr, the Young and the Restless is set to join its sister daytime drama, The Bold and the Beautiful. Both soaps will be filming next week. While Y&R  is only starting filming next week, B&B continued production at the studio around two weeks ago.

Soon after Eric posts his message to Twitter, The Young and the Restless fans start responding.  The tweet has attracted around 2,200 likes and has been shared more than 100 times. While most fans are thrilled the show may soon offer new episodes, others are concerned. This is as COVID-19 cases continue to surge in the state. Those fans are worried production could be starting up too soon.

One fan was thrilled to see the pair, telling Eric and Tony they look very dashing in their face masks and wishing them luck. Another writes they are “concerned as hell” that it is too early to start up again. They stress that the virus is “spiking badly,” asking them to please hold off for a while.

Yet another fan thanks Eric for wearing a mask, adding “Love you, Sir!!!!” Another Twitter user wrote, “Pray everyone is clear & we’ll soon be seeing you all back on the screen.” They continue by writing how glad they are to follow so many of the stars on Twitter and Instagram. This gives them the chance to see who they are, both on and off the screen.

Meanwhile, a number of followers ask if this means the show will resume production soon. Eric responds, saying their current plan will have the cast and crew starting back in production next week.

Meanwhile, it looks like Braeden has been preparing for the show by posting a video of him exercising on a steep staircase. This was to put his character, Victor’s foes, Jack, Adam and Billy – on notice.

Jack & Adam& BILLY BOY, GET READY FOR MY COME BACK!!! pic.twitter.com/f1RAsxdWqb

While many believe production is starting up too soon, let’s wish the cast and crew of the Young and the Restless all the best in returning to production!