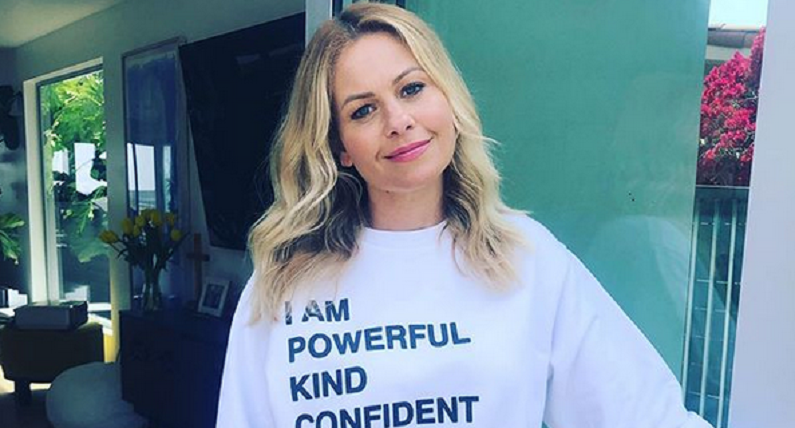 Candace Cameron Bure is the “Queen of Christmas.” So, duty calls. She has to film the beloved Christmas movie amid the pandemic. The Fuller House star explained why she had to resume filming in Canada.

Filming in a pandemic comes with its own safety rules. Candace informed her followers on Instagram that she’s been very safe. She’s so safe that she had to quarantine in Canada. However, she’s had someone else with her, so she’s not completely on her own. Read on to learn about Candace’s unique filming situation.

The Hallmark Channel actress has been quarantining with her TV mom Mary Lou Retton. The pair even rang in the Fourth of July together. Production for Aurora Teagarden Mysteries was shut down back in March. In one of her Instagram Stories, Candace explained why she has to film in Canada. In the Great North, she’s considered an “essential worker” since the show employs around 200 Canadian people.

“We’re abiding by all of the Canadian laws and we have to quarantine,” Candace Cameron Bure says in an Instagram clip.

Shooting will also change for those Hallmark movies, per Yahoo! Entertainment. For instance, people can’t be in the same room together. So, that means filming will take longer than expected. Hallmark is still working out some of the safety protocols right now.

What do you do when you’re quarantined together in Canada on 4th of July 🇺🇸? Make up show tunes with @therealmarilu of course! #4thofjuly #america #independenceday #quarantine #canada #hallmarkchannel

“We’ll be the only two people in a home for two weeks until we get to start production,” the former child star said in an exclusive interview with Entertainment Tonight.

Candace spoke to ET as she was packing up for her big trip. After she finishes her 14th Teagarden Mysteries, she will film her ninth Christmas movie. The actress admits that she’s been packing everything from her home into her luggage.

That’s because she can’t just wander around the resort or go to the grocery store. Candace laughed when she said she has an entire suitcase filled with food.

The actress and producer will add a new title to her resume. Meaghan Murphy, the chief content director of Woman’s Day asked Candace Cameron Bure to become the magazine’s new Chief Spiritual Officer or CSO for short.

Candace exclaimed that “those are the best initials ever.” It comes as no surprise to fans of the actress who’s outspoken about her Christian faith.

“My Christian faith is so meaningful to me, and it’s the foundation of who I am,” Candace said in an interview with Woman’s Day. “It always goes before me, and I’ve never been shy to talk about my faith. So to be known for that and to be respected for that is great.”

I’m beyond thrilled to announce that I will be the new Chief Spiritual Officer (CSO) for @womansdaymag 🎉🙌🏼💗 In every issue I will share with you scripture that over the years has spoke to my heart and hopefully will speak to yours as well. A big THANK YOU to @meaghanbmurphy for allowing me to be a part of something so special. You can pick up your own copy of Woman’s Day Magazine on July 14th and every month after that! #womansdaymagazine

In her new role, Candace wants to encourage readers to grow in their faith. The Full House alum says that her “faith goes with me everywhere I go.” She hopes that her column will cause readers to “apply that nugget into their lives.”

The Kind is the New Classy author wants to cover different topics in each of her columns. She also hopes to show people how to incorporate faith into their personal lives.

“I want to focus on how to treat people in the world even when you disagree with them,” Candace explained. “We have to be kind; we have to respect that we all have different beliefs and choose love overall.”

Fans can look forward to her first column in the July/August 2020 issue, which hits newsstands on Monday, July 14.