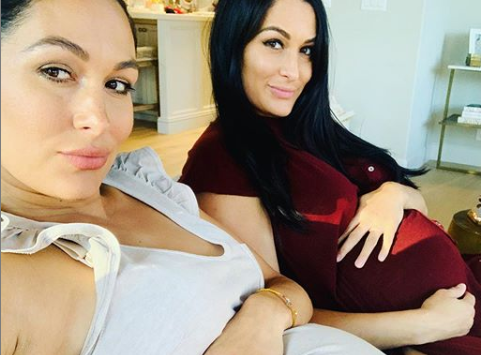 Total Bellas twins Brie Bella and Nikki Bella are both preparing to invite new babies into the world in a few weeks. They announced their pregnancies at the beginning of the year. Since then, they’ve taken a lot of pictures together and shown off their baby bumps.

On July 6, they posted pictures from their joint maternity photoshoot. According to their captions, the twins have enjoyed experiencing pregnancy together. Now, they excitedly await their babies’ birthdays.

Brie first posted a picture on Instagram of herself and Nikki posing together with their baby bumps. She said that being pregnant alongside her sister has been a “special” experience. Brie also noted that she’s thankful to have her sister by her side through this journey. In early July, Brie and Nikki admitted that they’ve been anxious about being pregnant amidst the pandemic. However, they said that it’s comforting to have each other during this time.

In her caption, the Total Bellas star said that when she found out she and Nikki were pregnant at the same time, she was excited to see if their pregnancy journeys would be similar. Just as they suspected, Brie and Nikki have experienced many similarities. Brie wrote, “It’s crazy how identical our pregnancies have become…from cravings to symptoms.”

Later, Brie posted a few pictures of herself from the photoshoot. She captioned one post, “I’m not one to do s-xy selfies but I’ll pose nude pregnant any day lol.” The Total Bellas star is proud of her maternity body and enjoys showing it off.

Like Brie, Nikki is excited to share her nude photoshoot pictures. She posted two photos of both Total Bellas twins embracing their pregnant bellies. Nikki wrote, “Pregnancy has been an incredible journey so far, even through some of the toughest times we have faced in this world so far.” Nikki isn’t discouraged by the negativity in the world, though. She continued, “And through some of the most beautiful life changing times as well.”

Nikki and her fiance Artem Chigvintsev are beyond excited to meet their baby boy. The Total Bellas star showed her pictures off on her Instagram story. She posted a shot with Artem and added the words, “My daddy,” and “Hold us tight and never let us go.”

In addition to these posts, Nikki shared two more photos from the shoot on her Instagram feed. She used heart stickers to cover up parts of the pictures because Artem thought they were “a little too cheeky.” Nikki said that Artem was nervous during the photo session. But, once he warmed up, the couple enjoyed taking some intimate pictures together.

Brie and Nikki are both ready for their babies to arrive. Keep up with TV Shows Ace for more updates on these Total Bellas stars’ pregnancy journeys.