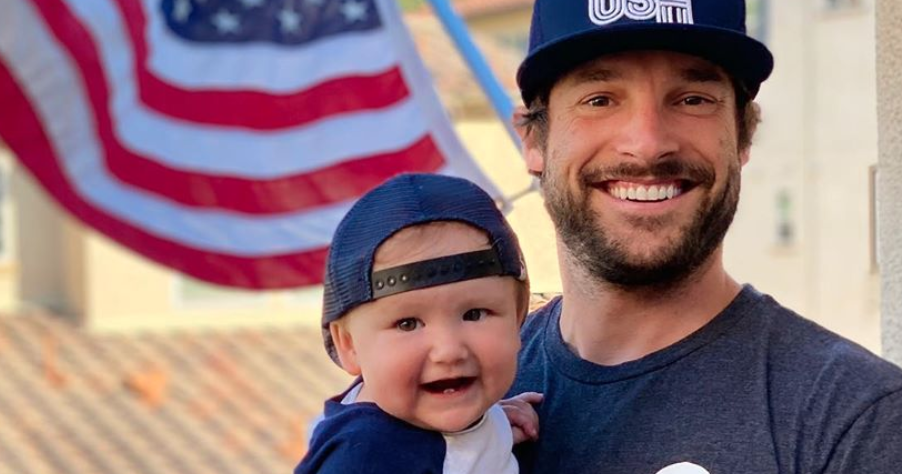 Becca Kufrin and Garrett Yrigoyen have been engaged since the end of Becca’s season of The Bachelorette. Some have suspected them to break up since then though. Now, they even spent the Fourth of July apart.

Becca and Garret have been engaged for awhile now. However, they decided to spend the Fourth with their separate families Us Weekly says. However, they still see to be keeping tabs on each other. Garrett posted a photo on Instagram and Becca replied back to it, showing his family a little bit of love.

The photo was of Garrett holding his nephew. He captioned the photo, explaining they were teaching the baby the meaning of the holiday.

“Happy 4th of July. Teaching the little guy what our flag stands for 🇺🇸,” he wrote. “The stripes represent the original 13 Colonies. The stars represent the 50 states of the Union. (red) symbolizes hardiness and valor, (white) symbolizes purity and innocence, and (blue) represents vigilance, perseverance and justice.”

Becca could be found in the comments, talking about how cute the baby looked.

While some people think they may have split, Becca’s comment makes it seem like they didn’t. Perhaps they just decided to spend the holiday with their own families while they aren’t married.

Happy 4th of July. Teaching the little guy what our flag stands for 🇺🇸: The stripes represent the original 13 Colonies. The stars represent the 50 states of the Union. 🟥 (red) symbolizes hardiness and valor, ⬜️ (white) symbolizes purity and innocence, and 🟦 (blue) represents vigilance, perseverance and justice.

There was reason to believe the couple would eventually split though. Garrett made a post about that Becca didn’t really agree with. She even talked about it on Rachel Lindsay’s podcast.

“Garrett is my fiancé and I love him and to his core, I believe that he is a good person. What he posted … I don’t align with and I don’t agree with,” she said at the beginning of June. “I don’t think he meant it in a malicious way, I do think it was tone deaf and it was the wrong time and message and sentiment. … I’m trying to get him to see the bigger picture.”

It went even further than that though. Apparently, the two struggled to work through their differences and Becca even admitted she didn’t know where her relationship with Garrett was going to end up. She also apologized for defending him.

“I want to say to our listeners out there — because I’m sure many will hear this back and wonder and ask and have opinions — for those who are curious about my relationship with Garrett at this point, all I can say right now is I don’t know,” Becca said. “I can’t give anything more than that. It’s something that we are trying to work through and discuss and do work on at home at this time and that’s where the work will remain and that’s really the best can give you at this point.”

It doesn’t seem as though they have split yet, but it’s clear they have some core differences that they are going to have to work through.

Do you think Becca and Garrett should stay together or should they end their Bachelorette relationship? Let us know what you think in the comments. Come back to TV Shows Ace for news on all of your favorite Bachelor Nation stars.