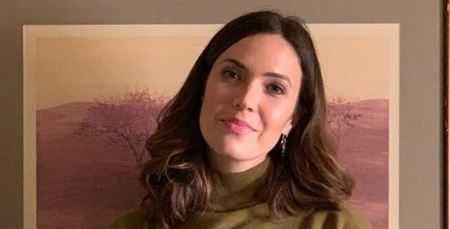 Mandy Moore star of This Is Us says filming for Season 5 should’ve begun this week. Because of the coronavirus pandemic, Mandy said there’s been no official word on when they might begin production. In a Today Show interview recently, the star discussed the show’s second to last season. Mandy said that there are “conflicting reports” on when This Is Us will resume shooting.

Since the pandemic has changed the normal filming schedule, Mandy said producers are waiting for the okay from local government and the health department before they begin production on the series. Moore said “I’m hoping that’s sooner rather than later,” and that the whole cast is “super anxious to get back.”

Mandy says even though the cast has had a lot of Zoom meetings for the past couple of months, she has been staying busy. Because Mandy and her husband Taylor Goldsmith are both musicians, they have been getting creative together. Moore has also been practicing her cooking skills by baking cakes.

According to Inquisitr, this doesn’t mean Mandy Moore is not ready to reunite with her castmates. She posted a throwback photo on her Instagram account. The photo is from Season 4. The actress has said it is one of her favorite seasons so far. Because of the timeline on the show, her present-day character has been diagnosed with Alzheimers disease. Mandy captioned a scene from This Is Us. “Season 4 is my favorite season yet and I can’t wait to get back to work, hug everyone again, and pick up where we left off!”

Rumored Filming To Begin After Christmas

This Is Us will normally film during the summer for a September premiere. Because of COVID-19, it has been delayed drastically. Mandy Moore’s TV husband Jon Huertas (Miguel on the show) hinted that production might not begin until after Christmas.

Huertas said, “I was just on the phone with Dan Fogelman and we’re talking about, you know, we may not go into production until January, depending on whether or not there’s a second wave.” He continues, “When we talk about the protocols and the guidelines that we may be following when we go back into production. Because it’s really kind of daunting to all of us.”

Fans were stunned by his admission, so Moore’s TV husband Huertas later clarified the timeline saying that the cast and crew of This Is Us was “raring” to go. With the coronavirus, many shows are having to delay production which will push back their premiere dates. The cast can’t wait for This Is Us to premiere and the fans are just as eager to watch.

This Is Us airs on NBC at 9pm on Tuesdays. Stay tuned for updates on the show’s return.