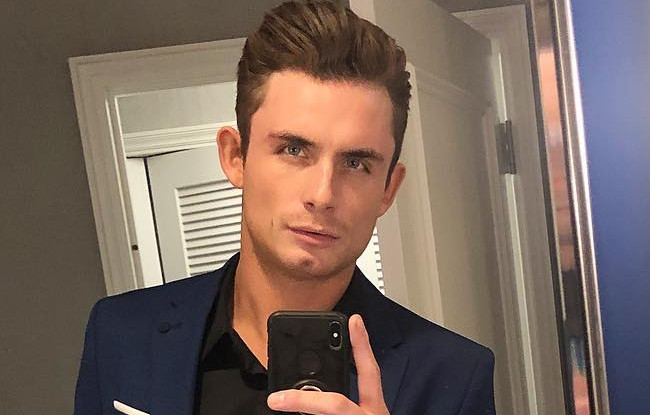 Vanderpump Rules star James Kennedy has something personal to celebrate over the holiday weekend. The reality star is celebrating his freedom from drugs and alcohol. James opened up to his fans about his one-year anniversary of sober living.

We first met James Kennedy during Season 3 of VPR. He got an upgrade to full-time for Season 4. The show just finished Season 8. Ever since his debut, fans have seen James behave badly after drinking too much. In previous seasons, he fat-shamed co-star Katie Maloney-Schwartz and lashed out against Lala Kent’s fiancé Randall Emmett.

In fact, he was let go from his SUR DJing gig for drinking on the job and other alcohol-fueled behavior.

However, it was during Season 8 that viewers got a glimpse of how deep James’ alcohol problem went. His girlfriend and SURver, Raquel Leviss, went to bed one night and woke up the next morning to verbally abusive texts from James. He was angry that she didn’t answer his texts the night before.

While she didn’t read all of the texts on-camera, she read more than enough. Us Weekly reports that some of the texts included insults such as “wh*re” and “sl*t.” At that point, Raquel said enough is enough. She told James that if he didn’t quit drinking, they were breaking up.

Thus began James’ sobriety journey. In November of 2019, he revealed that he was five-months sober. The footage from Season 8 didn’t begin airing until January.

At the beginning of Season 8, filmed last summer, James was still drinking heavily. However, after Raquel’s ultimatum, he began attending AA meetings. He leaned on VPR co-star, Lala Kent, who is on her own sober journey.

Toward the end of the seasons, fans got to see the new and improved James Kennedy. Due to his progress, Lisa Vanderpump let James return to DJing at SUR. He was the DJ at the season finale party to celebrate the one-year anniversary of TomTom restaurant.

Viewers saw James’ heartfelt apologies to both Katie Maloney-Schwartz and Randall Emmett for his past behavior.

On Sunday, July 5, James took to Instagram to let his followers in on his celebration. Alongside a photo of him and his dog, Graham, James wrote that he has been sober for an entire year. He also wrote that it was the “best decision” to stop drinking. James assures fans that he’s “going strong” in his sobriety journey.

James then takes the chance to give Raquel a shout-out. He calls her his “rock,” thanking her for standing by him the last year.

Hey everyone just wanted to let you all know I’ve made it to my one year sober Today! Letting go of drinking was the best decision I ever made and I’m going strong. I don’t miss the booze …… I don’t miss the feeling …. I’m so grateful for everything now and life has become more beautiful in many ways. Thank you to my rock @raquelleviss for getting me here I couldn’t of done this without you my love.♥️ and thank you all for the support this past year.

VPR’s Jax Taylor wrote in the comments “Congrats brother, well deserved.” Fans took the opportunity to tell Jax that he should “try the sober life” next.

Raquel shared a photo of the couple on her own Instagram. She let fans know in the caption that “today James is 1 year sober.” While she finds that worthy of a celebration, it’s not the only reason. She writes that “the love” James shows her “every day” is important, too.

Today James is 1 year sober! Lots to celebrate but most important is the love you show me every single day @itsjameskennedy ❤️

Raquel and James have been dating since 2016.

Vanderpump Rules recently underwent some huge changings after Bravo let go four of the stars. Stassi Schroeder, Kristen Doute, Max Boyens and Brett Caprioni lost their jobs due to racially insensitive behavior. Bravo has yet to announce what the plans are for VPR.