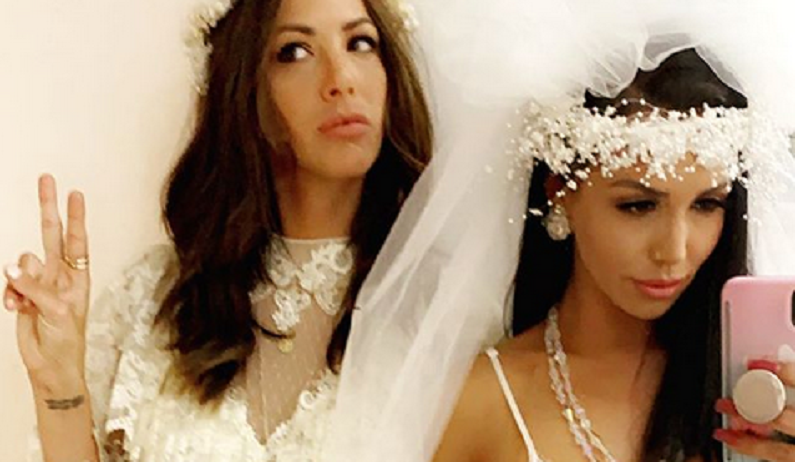 Kristen Doute showed some support for Scheana Shay. While she’s no longer on Vanderpump Rules, she’s still there for her former co-stars. This comes after Scheana sub-tweeted her friends on Twitter. Kristen has been there for Scheana after she revealed she suffered a miscarriage at six weeks pregnant.

The Bravo personality shared the details on her podcast. She even released an emotional YouTube video. Kristen showed that she’s there for Scheana, no matter what. The “Good as Gold” singer even confirmed that she has been in touch with Kristen following her miscarriage.

As per The Blast, Kristen Doute took to her Instagram Stories on Thursday, July 2 to share several photos of Scheana Shay. She talked about the ups and downs of their friendship. Kristen also shared a throwback photo of Scheana cuddling her boyfriend, Brock Davies.

“I love you,” Kristen wrote in the post as she tagged the couple. She followed up with a photo of her black eye while standing next to a posing Scheana.

happy new year around the sun, bean! @scheana i love you for your heart, your soul and your miniature stature. 🥳 I’m so proud of the woman you’ve become and so grateful for the friend that you are to me. 💖choosing these photos was so easy because you are 🔥 gurrrrl! HBD 🤟🏽

In the heartfelt message, Kristen shared her support for Scheana. “You’ve always been there for me through the hardest of times,” Kristen said. Kristen also shared a photo of herself with Scheana at Andy Cohen’s Clubhouse on Watch What Happens Live.

“And I promise to be here to hold your hand through yours,” she added.

Kristen has also reconnected with Stassi Schroeder. As TV Shows Ace previously reported, she reunited with former co-stars Jax Taylor and Tom Schwartz for Stassi’s 32nd birthday party. Meanwhile, Scheana opened up about her miscarriage in a new video. In the 35-minute video, she spoke with tears streaming down her face as she admitted that it’s “really really hard” to see some of her friends pregnant, like Stassi Schroeder.

During a recent episode of her podcast, “Shenanigans with Scheana Shay,” she revealed that she’s still in touch with former Vanderpump Rules co-star, Kristen Doute. Bravo fired her from the reality series after former castmate Faith Stowers shortly accused her of racially insensitive behavior.

After suffering her miscarriage, Scheana told her listeners that Kristen visited her at her Los Angeles home, as per The Blast.

“Kristen came over this weekend for Father’s Day and brought me flowers,” Scheana said, according to a report via Reality Blurb. “It was really, really good to see her and just to know that I do have some amazing friends.”

HAPPY BLACK FRIDAY! From our @jamesmae.co framily to yours, check out our biggest sale of the year!! ❤️🧡❤️ Happy shopping!

Scheana needs her friends the most right now. She said that some of them, including Kristen and Stassi, have supported her. Ariana Madix and Brittany Cartwright also offered support to Scheana after her miscarriage news.

However, there are some friends who haven’t been there for her. Us Weekly reported that Scheana subtweeted about some of her nonexistent friends.

I feel like a broken record expecting the same friendship I give in return. But is it THAT hard to check in?

“I feel like a broken record expecting the same friendship I give in return,” Scheana tweeted on Wednesday, July 1. “But is it THAT hard to check in?”

It’s clear that Kristen Doute has been there for Scheana Shay. She made it clear on Instagram. Vanderpump Rules Season 9 is said to start filming in the following weeks ahead.