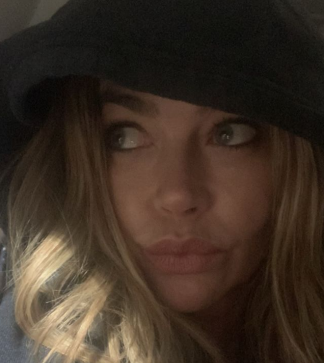 The Real Housewives shows are no strangers to drama; it’s honestly what fans really love about the shows. The Real Housewives of Beverly Hills is no exception. RHOBH went on a brief hiatus for Season 10 two weeks ago because of scheduling setbacks due to Covid-19. But the hiatus isn’t stopping the cast members from hyping fans up with tidbits that make the July 8th, return date seem very far away. Brandi Glanville posted one such tidbit on Twitter. In the post, Glanville appears to be kissing her castmate, Denise Richards.

Glanville made her first appearance on The Real Housewives of Beverly Hills in 2011 and other than a break between 2016 and 2019, she has been a regular star. Glanville returned to the show at the same time that Denise Richards joined the cast for her freshman season. The two women have had their share of drama this season with speculation and rumors.

The tweet from June 27th has only added fuel to this forest fire. The mid-season trailer for RHOBH even has Glanville telling the group that, “I f–ked her, woke up the next morning [and] she said, ‘Aaron [Richard’s husband] can never know this. He’ll kill me.’”

The shock on the faces of everyone in the group at this revelation is very telling. Every cast member present was surprised, shocked, or in disbelief and they confronted by Richards with the information. When The Bold and the Beautiful actress heard what was said, Richards denied the affair immediately. In a clip, she exclaimed, “What the f–k? That is not true!”

Reunited with my hubby after filming out of town for a couple days. ❤️my man @aaronwilliamcameron

Richards denied the affair allegation in an interview saying, “People are always going to say stuff, and I know my truth, my husband does — it is what it is”. Denise is no stranger to drama and the harsh lights of press cameras, and social media. She said, “I’ve had so much stuff said over the years about me and my family, and this is like nothing compared to some of the things that have been said.”

Richards seems to be taking all the allegations in stride like a seasoned veteran. She even said, “I love for things to play out on television instead of social media, but the stuff that’s been out there, I have been through it in the media with different claims being made.” Richards appears to be confident with what will play out in the rest of the season.

A source close to Glanville said that she made the claim that the affair with Richards had been ongoing. The source reported that Glanville said, “[it] happened more than once.” and, “it was never serious, but they had fun.”

The she-said versus she-said drama is going to keep playing out in upcoming episodes with the cast and audience having to decide who they believe. One cast member, though, has already weighed in. After the reveal and Richards’ appalled reaction, Dorit Kemsley said, “I believe Denise,”. The other cast members have done several interviews, but we have not seen anyone else give their verdict on who they believe.

In a clip from the trailer, Richards threatened to leave the show. Reports also surfaced that she refused to film for the show after the reveal. But Richards’ recent interview statement was interesting, “So for me, personally, this is like kindergarten. I’m, like, ‘Well, whatever, we’ll just let it play out on the show.’ It is what it is.” With the show’s return coming in five days we can only wait with bated breath to see what happens.