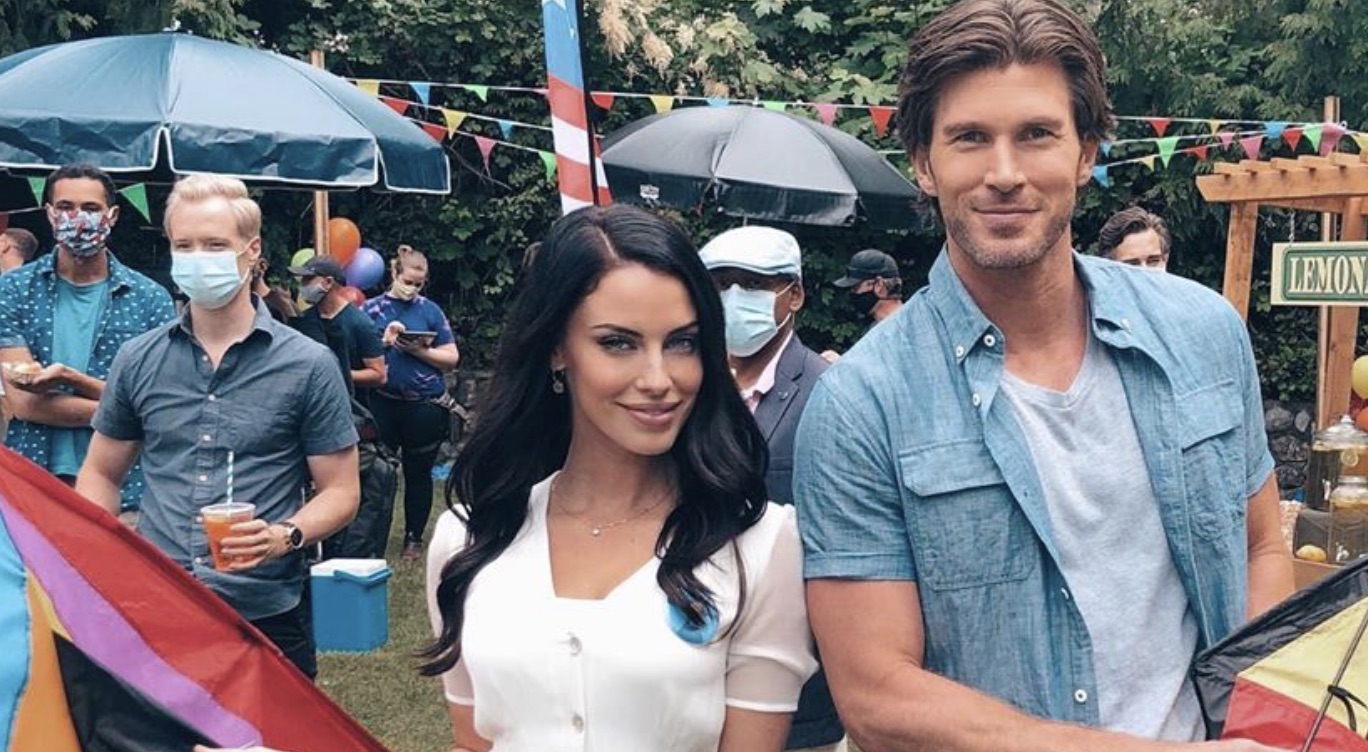 Hallmark fans can now get excited about some new movies. Hallmark stars are sharing photos from sets from new romances all the way to Christmas movies. Things have drastically changed on the sets. What movies are filming now and in the near future?

Although there has not been much official news, Hallmark is back making movies. How have things changed? One movie that is currently filming in Victoria, Canada,  called Kite Festival Of Love is a good example of how things changed. On IMDb it is called Wind Song.

Either way, it is about kites and it is written and directed by Christie Will Wolf. Christie has been involved with dozens of movies. For example, she also directed and was a producer on the recent Christopher Russell, Cindy Busby Hallmark romance, Love In the Forecast. That was one of the last Hallmark movies that were filmed before everything was shut down in March due to the coronavirus.

But, now Christie reported on Instagram she is back and how things are done now is quite different. First, there is a much smaller crew. This is because some areas are too small to allow for social distancing and work. Second, they are all wearing masks and practicing other safety precautions.

Jessica Lowndes went to Instagram to share a photo alongside Christopher Russell. They are standing shoulder to shoulder, if that is even possible. Christopher is mighty tall! They are holding colorful kites. Behind them, in the near distance, are others with masks on. All of these people are about four feet from each other. They are probably social distancing.

This is a good example of what the various Hallmark sets look like in this new age of Covid-19. They are keeping everyone safe, and making new movies for romance movie fans.

What Hallmark Favorites Are Doing

Right now, there are bound to be a cornucopia of Hallmark Christmas movies being cranked out. Last year, there were 40 news ones. Andrew Walker, who starred in two last year, Merry & Bright and Christmas On My Mind is currently working with Alicia Witt on Christmas Music Store. According to Hotline to Hallmark’s Twitter feed, they are currently filming in Utah.

That is not all that Andrew Walker is doing. Soon, he is filming Beverly Hills Wedding. They also dished that Walker and Nikki DeLoach (Two Turtle Doves) are currently developing a mystery series. Nikki is also filming a new Christmas movie in July. That is a lot of news!

Candace Cameron Bure will soon be working on both a Christmas movie and at least one new Aurora Teagarden Mystery. This will likely be just the beginning for this busy actress.

For a while there, it appeared that Brennan Elliot and Sarah Drew’s Hallmark movie, Christmas In Vienna was going to be the only 2020 Hallmark Christmas movie. According to Elliot’s Twitter feed, the two started filming the movie in Eastern Europe before Christmas 2019.

Then, in January they returned back to Eastern Europe and finished up filming in Vienna. Brennan, who plays a U.S. diplomat in this movie promises “Music, humor, love, romance, food and cutest kids ever!” We can’t wait!

That’s a wrap folks! ⁦@sarahdrew⁩ and this guy saying c u ⁦@hallmarkchannel⁩ this holiday season for a true #christmas treat #Vienna style! Music,humor,love,romance,food and cutest kids ever! #countdowntochristmas2020 c u then.what a ride! pic.twitter.com/Q5ks1lty5n

One Hallmark 2019 Christmas and holiday movie that never aired was A New Year’s Resolution. It stars Michael Rady (Christmas At Pemberley Manor) and Aimee Teegarden (The Ranch). Hallmark just took it off the schedule with no explanation.

With a shorter 2020 filming schedule, that decision may be gold.