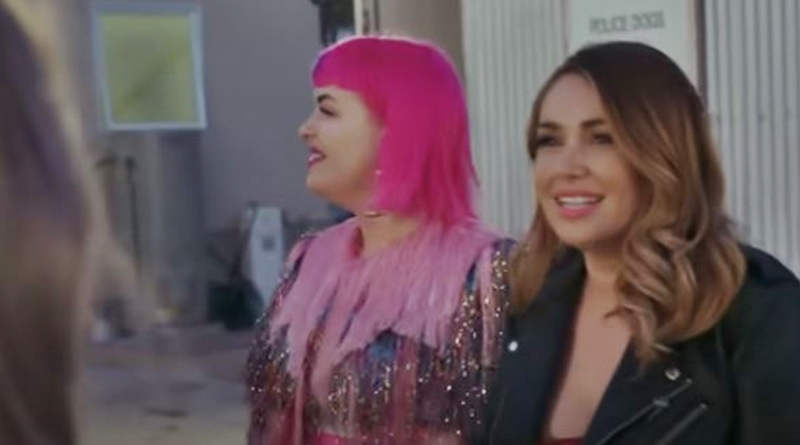 90 Day Fiance fans know that same-gender couple, Erika Owens and Stephanie Matto never worked out. Now, Erika Owens revealed she loves snakes. And, fans think even if she stuck around, that would probably freak out Stephanie. Plus, typical of the colorful girl from Australia, she particularly likes a bright green snake.

Erika Owens seems colorful in every way. Rainbow clothing to rainbow hair, and now brightly-colored reptiles look well on her. On Monday, Erika took to her Instagram and shared a photo of herself with her “cute Pop.” Standing beside him, she held up a long, bright green snake. She said the snake’s named Soda and she loves reptiles! She added, “I’ve wanted to hold this beautiful green tree python for so long and I finally got my chance!”

Actually, fans saw the 90 Day Faince star handling reptiles back in March. She shared a photo of herself holding a less colorful snake. She said, “channeling my inner Irwin.” In that post, Erika mentioned her relatives actually work with reptiles as herpetologists. As she grew up around lizards, snakes, and other reptiles, she seemed excited about showing Stephanie a snake. But, some fans think Stephanie wouldn’t appreciate the bright green snake.

Plenty of people confessed their love for reptiles on Erika’s post. One fan wrote, “Thats soo cute.” They think that reptiles make for “amazing companions.” That person looks after “3 bearded dragons, 3 leopard geckos, 2 russian stories, and [cares for] a chinese water dragon.” Another one liked the green snake. They noted, “Omg is that a green tree python ?! ❤️ I’ve always wanted one but I heard they are a bit on the vicious side 😂.” Then, fans mentioned their own critters, like a beardie, an albino snake, and a red slider.

But, fans of 90 Day Fiance doubt Stephanie’s into the creatures. One follower noted that Stephanie probably would “freak out.” Next, they added that likely, “she cries” and then talks about “her illness.” That fan really likes Erika a lot. Actually, they pointed out a negative and boring person went out of her life. Mostly, fans like Erika, but not Stephanie. They felt Steph came over as heartless and cruel in the Tell All. But, one fan told Erika they think of her as the “Lizard Queen.”

Another fan told Erika, “your seriously just all around awsome! (sic).” Some fans hope that one day Erika visits Florida, noting plenty of reptiles live in the state. 90 Day Fiance fans also liked seeing her “Pop” and they think he looks very cute as well. What did you think of the green snake in the photo of Erika with her “Pops?” Do you think Stephanie seems nothing like a snake lover? Sound off in the comments below.