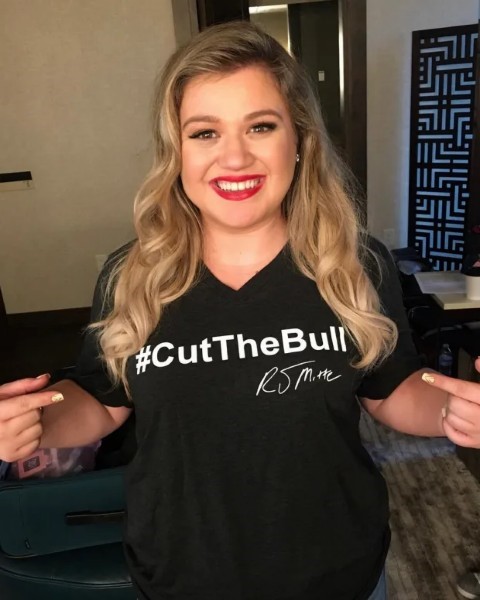 There isn’t anything slowing down “Miss Independent” singer, Voice coach, and now Daytime-Emmy-winning talk show host Kelly Clarkson. Kelly won the Daytime Emmy Award for Outstanding Talk Show Host on June 26, for her premiere season of The Kelly Clarkson Show! Kelly tweeted out her surprise and thanks to all of her crew, fans and everyone that supported her this season.

Clarkson also had a special addition to the tweet for her estranged husband Brandon Blackstock. She tweeted, “Thank you so much to @BBlackstock for believing in me & convincing me to do @KellyClarksonTV show”.

This is a big win for Kelly. Kelly won the award over other hosts from The Talk, Live with Kelly and Ryan and others for this title, and it is well deserved. As a host, Clarkson asks deep questions and is not afraid to be vulnerable with her guests. In Clarkson’s recent interview with Demi Lovato, Kelly admitted that her personal struggle with depression is a daily fight. Lovato thanked Clarkson for being a positive influence in her life. Demi said, “You were, like, the first idol that I ever had. I wouldn’t be the artist — or even the person that I am, with being so outspoken and vulnerable and fearless — if I hadn’t had you to look up to, so I thank you for that.” Demi also said, “I want to be like her (Clarkson) because she’s real and she’s genuine.’”

These open and candid conversations about mental health, self-love, and family make The Kelly Clarkson show unique and inviting to viewers.

However, the shout out from Voice coach Clarkson to Blackstock is a little surprising. Kelly filed for divorce from Brandon on June 4, 2020, and since then information about what lead to the break came to light. One issue in the relationship was Kelly going to Hollywood to host The Kelly Clarkson Show, taking her away from the couple’s life in Nashville. Blackstock enjoyed their “quiet” life in Nashville but with Kelly taking on more roles in Hollywood as tv show host as well as Voice coach that life changed.

Kelly thanking Blackstock for his support and encouragement is interesting. Blackstock encouraged his wife to go after this opportunity is wonderful. He knew she would be a success, even if it took her away from their home more often.

Clarkson and Blackstock have been working toward an amicable split for their entire family. They share two children River, 6, and Remington, 4. Kelly considers herself a mom to Blackstock’s daughter Savannah, 18, and son Seth, 13, from his prior marriage. Although, Kelly has requested that the court terminate the ability to award spousal support. Clarkson has worked hard to earn her multi-million-dollar fortune. So, she does not want to lose a large portion of it to Blackstock.

Did Ariana Madix Change Her Stance On Having Kids?
Kyle Richards Calls Out Lisa Vanderpump: ‘Give It A Rest’
Amy King Teases That Jill Duggar May Be Working On A Tell-All Book
‘Arthur’ Fans Grieve Over News Of Long-Running Show’s End
Farrah Abraham Flashes Bare Booty, Gets Candid About Plastic Surgery