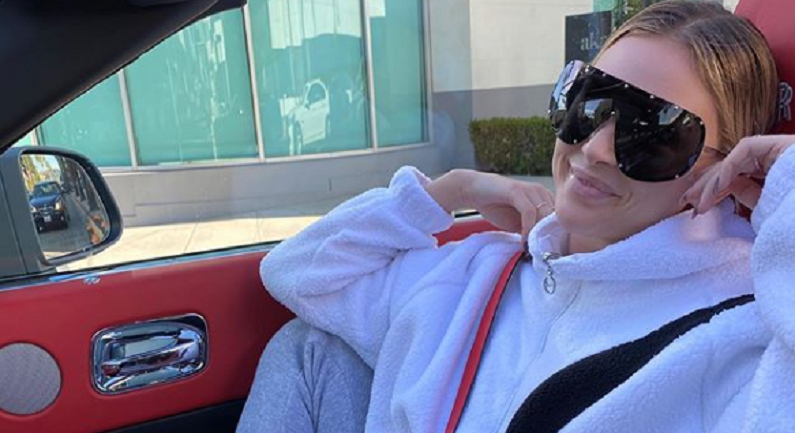 Lala Kent took a break from social media. She was silent following the firings of her Vanderpump Rules co-stars Stassi Schroeder and Kristen Doute. However, she returned to social media. Her fiancé posted her first photo since the surprising firings took place earlier this week.

The VPR co-star needed a night out. She went on a date with her fiancé Randall Emmett. Some businesses are starting to reopen amid the ongoing coronavirus pandemic. Lala and Randall posted several photos of their date night on Friday, June 12. While she was happy to be with the movie producer, she appeared somber amid the Bravo scandal.

Per The Blast, Randall Emmett took to Instagram to post a selfie with Lala Kent. The two sat at an outside restaurant as he enjoyed a drink. While Randall cut half of his face, he managed to get his fiancée into the shot. Lala Kent gave her signature baddie pose. “I see you,” Randall captioned the photo. He also posted two more photos of the model on his Instagram Story.

One of the photos showed Lala smiling at the camera. She rocked a simple black shirt and blonde hair. This look was much more subdued than her other looks. Randall Emmett wrote in the text overlay, “Nights night.” On Saturday, June 13, he shared a snapshot of his daughter giving him a kiss and a hug.

Lala may not remain silent for long. One of Randall’s followers asked, “When are you going to start recording your Podcast again? [sic]” He teased that it’s coming sooner than anticipated. “We’re back this week,” he responded.

She alleged that both women called the cops on her in 2018 for a crime she didn’t commit. VPR fans demanded Bravo to terminate their contracts. However, they aren’t the only VPR stars who lost their jobs.

Brett Caprioni and Max Boyens lost their VPR gigs for their past racist comments. But VPR fans are upset that Brittany Cartwright and Jax Taylor still have their jobs. Faith claimed that Brittany once called her a “nappy-headed h*.” While Lala’s job is safe, fans are after her for her “bully” mentality on the show.

Rapper 50 cent addresses his feud with Randall and Lala

Per Complex, 50 Cent took to Instagram to address his feud with Randall Emmett and Lala Kent. He wanted to know why Randall’s fiancée brought him up during the Vanderpump Rules Season 8 virtual reunion.

During the reunion, host Andy Cohen asked Lala why Season 8 didn’t dive into the feud.

“Well, number one, when this all happened, we were not filming,” Lala explained, per People. “I think we would have had a much harder time if it was happening during filming. But there was a lot of legal stuff going on that… Yeah.”

While Lala didn’t name the rapper, she admitted that there “was a very public beef between myself and a pretty famous rapper, and it got very bad.” The feud occurred back in April 2019 when 50 Cent claimed on Instagram that Randall owed him $1 million. He further instigated the feud when he shared a clip from VPR about Lala bragging over the gifts she received from Randall after the first time they slept together. During his interview on Watch What Happens Live, 50 claimed he didn’t have an issue with them.