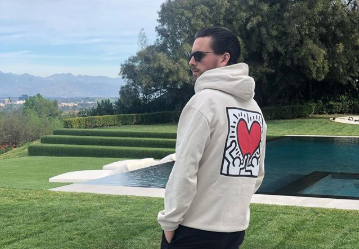 Scott Disick has been to treatment before so he knows how the media can latch onto something. Disick and his girlfriend of almost three years, Sofia Richie took a break before he went into rehab. The star checked himself into a Colorado treatment facility to deal with emotional issues. After a photo leaked, showing the thirty-seven-year-old in the facility, he left. He checked himself out after a week and flew back to LA.

Now, according to a source, he seems well and, “is still receiving treatment and working on his issues.”

Scott Disick Is Surrounding Himself With Positive People

A source says, “he is only spending time with people who can support him and help him be the best possible. They said, “he’s talking to a lot of people who can give him psychological, emotional, physical and spiritual health.”

They added he’s taking a break with Sofia to focus on his health and his family according to People. Sofia supports him and knows this is what he needs right now. Since the breakup, he’s been trying to stay out of the spotlight. According to his attorney Marty Singer, Scott didn’t go into rehab for drugs or alcohol as has been the case in the past. This time he is working on, “past traumas.”

His attorney released a statement about why he’d chosen to go to rehab. He said it was, “an effort to finally come to terms and deal with the pain that Scott has been silently suffering for many years due to the sudden death of his mother, followed by the death of his father 3 months later.”

The source said that Scott Disick, “will do anything to help himself be the right type of man and father, but being somewhere where photos are released is not a safe place for him.” He is committed to getting better. They said, “He knew he was spiraling out of control and wanted to get help. He wants to be the best dad possible.” Sofia and Kourtney encouraged him to get help.

While Scott looks at his next steps he’s surrounding himself with good people. While he hasn’t commented on his trip to rehab, he has been sharing pictures of his children on Instagram. Fans wish him well and will continue to follow his journey.