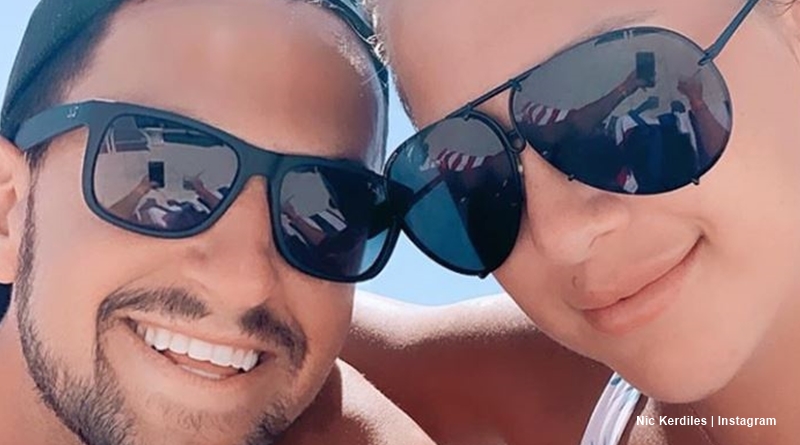 Savannah Chrisley hit back at fans who suggested she and Nic Kerdiles split. Since then, judging by photos Nic shared on his Instagram, they look just fine together. Plus, Savannah said that they’re doing just “great.” Their wedding’s in the cards one day, it seems, but just delayed. Fans think it might have gotten delayed again due to the coronavirus.

Social media speculated about Savannah and Nic when she spent time with him on a beach vacation. Some fans noticed she never wore her ring. Then, Savannah shared a photo of herself in a bedroom. She used a quote, and in part, it said: “coulda, shoulda, woulda.”  One troll noted, “Having relationship problems.” Savannah Chrisley replied, saying the quote in her caption referred to a quote about “life in general” She noted that she didn’t refer to her relationship with Nic.

Plenty of comments went Savannah Chrisley’s way during their beach vacay, and so many of her fans speculated they split. But when Nic Kerdiles shared a photo of them at the golf course together, it seemed apparent they still love each other. Nic’s photo showed them looking cute and cuddly on a golf cart. He captioned it with, “Trying to get this girl into golf is hard… but at least she’s a great co-pilot! Oh and she’s pretty easy on the eyes 🤪.”

Trying to get this girl into golf is hard… but at least she’s a great co-pilot! Oh and she’s pretty easy on the eyes 🤪

Savannah and Nic do great

With so much speculation about a split, Savannah spoke with People. On June 8, they reported on the split rumors. The Chrisley Knows Best star told them, “Nic and I are great!‘” She added, “We continue to grow each and every day and for that I am blessed!”‘ Actually, the body language between the two during their beach vacay already told the story of two young people deeply in love. But, the engagement period lasted since forever and fans impatiently await a wedding.

Five days before that, on another post showing them looking happy together, Nic wrote, “Already wishing we had another vacation planned… love vacationing with you! 😘” Savannah Chrisley said she loves him and that she hopes they go back soon. So, Nic suggested “tomorrow.” fans thought they looked radiant together. Certainly, the Chrisley Knows Best star looked very close to her man.

Already wishing we had another vacation planned… love vacationing with you! 😘 #takemeback

Fairytale-worthy love, but no wedding yet for Savannah Chrisley

While their story looks fairytale-worthy on social media, some fans worry that behind the scenes they run into problems. She and Nic agreed he needed to work on parts of himself. But on Nic’s post showing them on vacay, some fans also noted the coronavirus might delay any wedding plans. Irrespective, one fan commented, “Geez what’s the rush on them getting married. They take their marriage vows [seriously] I think and not rushing into it like some people do. Wish them happiness instead.”

Most fans just love the idea of them together, and those who care deeply would rather they work through issues before making that final commitment at a wedding. Do you agree that’s a good approach to a lifetime vow? Sound off in the comments below.