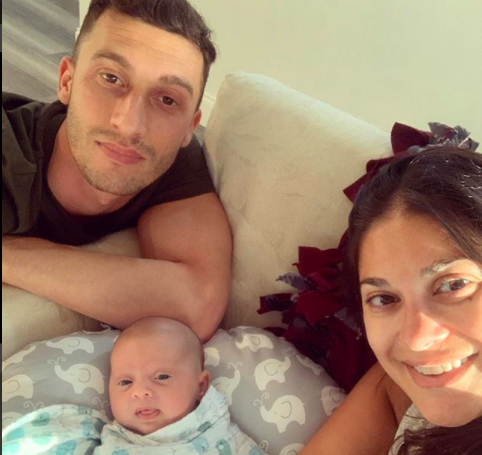 90 Day Fiancé star Loren Brovarnik shared her post-baby figure on Instagram for the first time Monday. She showed off her shrinking waistline in addition to an update on how she is handling being a first-time mom.

90 Day Fiancé couple Loren Goldstone and Alexei Brovarnik married just over four years ago. The pair first met on Loren’s Birthright trip to Israel in 2013. They then dated for awhile, became reality TV stars, and eventually got married. Every American girl’s dream!

Since the two of them were joined in holy matrimony, they have achieved several big milestones. Back in January Alexei FINALLY received his US citizenship.

Then of course Loren and Alexei’s first child, Shai Josef Brovarnik, made his debut in April!

As a first time mom, Loren is obviously excited to share photos of Shai on her Instagram. But, sadly, she has had to deal with trolls leaving mean comments about her son. She told InTouch Weekly, “People suck. I would be lying if I said it didn’t break my heart and I shed some tears.” But, she went on to say people can hate on her, but she has no tolerance for people’s rudeness toward her son.

Magical Monday Vibes! ✨ Getting back into my jeans… barely 🤣 … but they close 👏🏼👏🏼 … no one can really prepare you for the postpartum phase, but I’m not rushing it, I’m embracing this journey and will continue to share it with you, unfiltered. The ups, the downs and the all-arounds. ✨ #8weekspostpartum #feelingmotivated #nofilter #lovewhoyouare #fuckthehaters

Loren’s most recent Instagram post can be seen above. She rocked a red tank top and some trendy jeans to show off her weight loss. She captioned the post, “Getting back into my jeans … barely [laughing emoji] … but they close [clapping emojis] … no one can really prepare you for [this phase], but I’m not rushing it.” Loren went on to say she will continue sharing “unfiltered” content with her fans on the gram.

This is definitely a new trend for Loren and 90 Day Fiancé fans are loving her raw look into motherhood. She then wrapped up her post with the hashtags, “#8weekspostpartum #feelingmotivated #nofilter #lovewhoyouare #f–kthehaters.”

InTouch Weekly continued to report that Loren previously opened up on a different Instagram post saying, “I’m beyond exhausted. I haven’t brushed my hair in two weeks (I’m lucky if I can shower for five minutes a day),” she wrote. “I’ve been pooped and peed on regularly. I’m nursing every two hours like clockwork.” But at the same time, she has “never smiled bigger.”