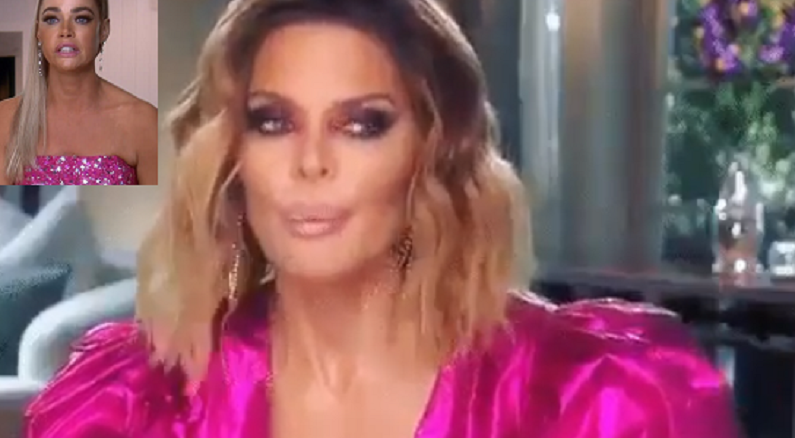 Lisa Rinna has a feeling that Denise Richard will quit The Real Housewives of Beverly Hills. The soap actress has a crystal ball and it doesn’t look good. She reportedly believes that Season 10 of the Bravo show will be the last for the Wild Things actress.

Lisa and Denise feuded long before RHOBH Season 10 aired. She thinks that Denise allegedly hooked up with their fellow co-star, Brandi Glanville. As fans know, Lisa doesn’t hold back on her thoughts. She shared what she sees in Denise’s future. Lisa feels that Denise is done with the show.

The Inquisitr dug up a report from Hollywood Life. In the report, Lisa Rinna feels that Denise Richards has plans to leave the show after Season 10. It makes sense since the Bold and the Beautiful actress has feuded with almost everyone on the show. The upcoming preview for RHOBH teases Denise’s alleged hookup with Brandi.

While Denise denied the rumors that she has quit the show despite her countless feuds with her co-stars. She hasn’t confirmed whether she will return for Season 11. Instead, she said that she will join the upcoming reunion special for the current season. An insider told Hollywood Life that Lisa has a feeling that Denise won’t return to RHOBH.

I have no idea why I’m posting last years RHOBH photos. I like us when we’re laughing. 🌈

“Rinna thinks Denise will walk away from the show after this season,” the insider told the outlet. “It’s really sad because [Lisa and Denise] were friends for so long, but [due to all the drama that went down this season] they are not interested in speaking with each other or repairing their friendship.”

The Inquisitr previously reportedly that Lisa isn’t just convinced that Denise won’t return to Season 11 of The Real Housewives of Beverly Hills. she also feels that Denise will skip the upcoming taping for the Season 10 reunion, which must be filmed virtually due the ongoing coronavirus pandemic. During the “At Home” edition on Watch What Happens Live, Lisa revealed she was unsure whether Denise would join her cast mates for the reunion.

“I’ll believe it when I see it,” Lisa said with a smile, per The Daily Dish.

“Tonight’s episode is from when we took this photo at my house,” Kyle wrote before talking about Denise’s absence. “Denise had not arrived yet. I know you’ll ask so I’m clarifying why she’s not in it.”

Tonight's episode is from when we took this photo at my house (Denise had not arrived yet. I know you'll ask so I'm clarifying why she's not in it ) It started out really lovely but went downhill from there. By the end of the night I was DONE as you can see from the last picture 🥴😂 shout out to @wondertentparties @casablancarestaurantvenice who are small businesses that I love and support and think they deserve some love 👏🏻👏🏻👏🏻 #rhobh 9/8c

She then teased that the rest of the night was a disaster. Kyle said everything was fine in the beginning, but those good vibes didn’t last for long. She said she was “DONE” by the end of the night.

What are your thoughts? Do you think Denise Richards will leave The Real Housewives of Beverly Hills? Sound off below in the comments section.

‘Young And The Restless’ SURPRISE Secrets: Ashland Locke Related To Prominent Family?
Did Erika Jayne Stage Her T.J. Maxx Shopping Trip? Some Fans Think So
Joy-Anna Forsyth Dragged For Putting Her Kids In ‘Unsafe’ Situation
Natasha Parker GUTTED By Theory She Schemed With Brendan Morais
Was Kim Kardashian Really Under That Mask? Some Don’t Think So