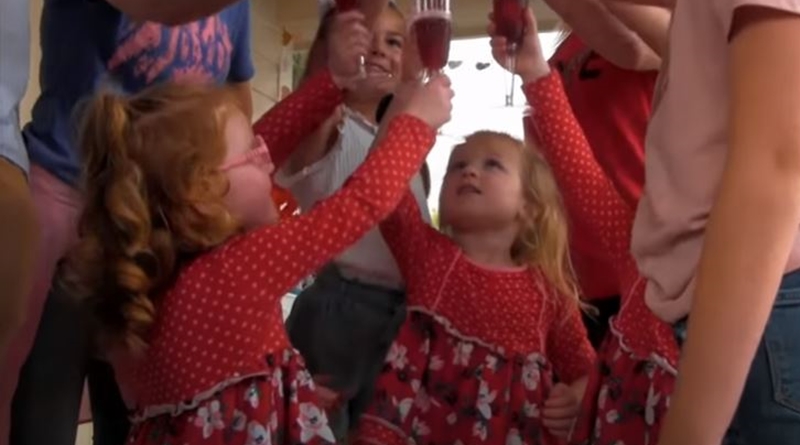 OutDaughtered returned to TLC on June 2. Excited about the upcoming show, the premiere delivered just what many fans hoped for. Fans took to social media and expressed their delight as the Busby family returned to their screens. Some of them think the show’s TLC’s best show.

So many fans waited eagerly for the show. The COVID-19 quarantine seemed long and stressful for some fans. So, ahead of the show, they chatted on social media about the new season. The quints, now five-years-old, and big sister Blayke certainly seemed like something light, entertaining, and family-friendly to watch. So, when the new season premiered, it found an audience ready for more of the adorable kids.

The premiere of OutDaughtered covered the kids’ schooling, and Blayke at the age where she wants a bit more of her own space. Then, it covered mom, Danielle running her business and revisited her hysterectomy. The family also practiced a fire drill, in case their home ever goes up in flames. But Valentine’s Day seemed very popular among fans. Adam couldn’t take the quints dancing, so he arranged for ice cream. The quints told him how much they love their dad and why. They also told each other what they love about their sisters. But, Danielle arranged a dance and everyone enjoyed themselves.

My six year old just woke up and asked to watch her favorite quarantine “friends” #OutDaughtered and lost her mind when she saw new episodes and they’re almost her age. I was equally excited to see Kiki and uncle Doofus doing their Tiktok moves at the dance pic.twitter.com/qoaOyitdOH

On Twitter, enthusiastic fans raved about the return on the show. One said, “I honestly missed my favorite family on TV. I’m so happy #OutDaughtered is officially back on TV. It’s crazy how fast they’ve all grown up. Cant wait for the rest of the season, (sic).” Then, another fan explained that their whole family “loves the show.” They feel the Busby family brings the best “family TV show on TLC.” Plenty of them fell in love with the scene where Adam told his kids he much he loved them, and the way they responded.

Parker Kate stole the heart of OutDaughtered fans with her comment. She told her dad Adam, that he made her “feel safe.” That’s poignant,  as Parker Kate suffered anxiety in past seasons. One fan noted, “Parker is the sweetest little girl… she made me cry when she said daddy makes me feel safe… Parker take it from a daddy’s girl, that’s what daddy’s are supposed to do, and what my daddy did for me when I was your age. (sic).”

The Busby’s are easily my favorite family on @TLC! Getting to watch Blayke & the quints grow up is the cutest thing. Adam & Danielle are raiding the sweetest girls 🥰💕 #OutDaughtered #TLC

Cable ratings for OutDaughtered on June 2

TV Recaps noted that OutDaughtered ranked 44 on Tuesday, June 2. Actually, it outperformed fan-favorite show, 7 Little Johnstons which came in at 56. With competition like Vanderpump Rules, CNN Newsroom, Hannity, and Anderson Cooper, 44’s not a bad place for the show on the chart.

Did you watch the premiere of OutDaughtered? Sound of your thoughts about the new season in the comments below.

OutDaughtered airs on Tuesday nights at 9 p.m. ET on TLC.